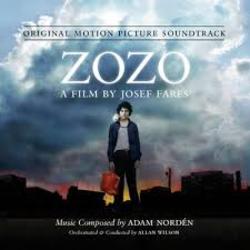 Performed by
The Philharmonia Orchestra, London

Zozo is not a CD one might be inclined to randomly buy at a record store. And yet one should, if they can find the import.  Zozo is Sweden\'s official selection for Foreign Language Film at the 78th Annual Academy Awards. It tells the story of an Arabic boy whose family is planning on moving from Lebanon to Sweden during the Lebanese civil war before being abruptly killed in an explosion. Zozo decides to make his way to the airport with his pet chicken and a young girl he encounters along the way. The unassuming score is by Adam Nordén and, while his name might not be recognized by anyone reading this review, it should not be dismissed.

Fans of Mychael Danna\'s ethnic concoctions will be pleased with Zozo, but to simply compare the score to Danna\'s style would be overly simplistic. Nordén has a sound all his own, but the subtlety and beauty of his melodies and his understanding of non-Western instruments certainly recall what both Mychael and his brother Jeff Danna have been doing for some years. Nordén carefully crafts his universe with a sad piano, a soft duduk, the occasional guitar, even a choir, and a toned down string ensemble. The resulting landscape is one of desolation but also of painful beauty. This impression is compounded by the impact of Zozo\'s Theme which makes its way into half of the tracks on the album. Its construction is delicate and sullen, and the choice of piano and duduk brilliantly balances the European and Arabic elements of the story, the melody-carrying piano evoking Zozo\'s yearning while the soft duduk in counterpoint reminds us of his war-torn surroundings.

Another composer I am reminded of is Antonio Pinto with his modest score to Lord of War. In both Zozo and Lord of War, the local flavor of the story never overpowers the melodies but only colors them slightly, leaving the compositions accessible to a wide audience. Nordén complements his piano, duduk, and guitar approach with typical Arabic percussion pieces ("In Class", "Shoplifting"), harmonious voice writing for mixed choir ("Escape", "God Visits"), and a male vocalist ("Lullaby"). While most of the score is melancholic, Zozo\'s Theme is allowed to blossom in the major mode for the "End Credits", a five-minute highlight that celebrates a great theme on the guitar, which is soon joined by the strings, the male vocalist, and a small percussion ensemble. The duduk reprises the melody at the three-minute mark and where the use of the duduk here differs from that of most Hollywood scores is in the tenderness of its playing. The sound of this oboe in Zozo is not harsh, but balmy and comforting.

There\'s something of a uselessness in reviewing and recommending the score to a blockbuster that will be bought by most film score listeners. It is not an uptown sneer on my part, but rather a way of saying that a reviewer\'s most satisfying job is to bring to light a score that might have been forgotten by many. Zozo is not a CD you might be inclined to pick up on a hunch, but it is my job to tell you that you should. It\'s what I find most satisfying about what I do and, if I can get one person that might not have noticed it to pick it up, then my job is done.