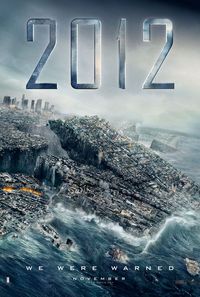 With 2012, Roland Emmerich - the current king of modern disaster films - takes on the theory of the end-of-the-world as prophesied by the ancient Maya to take place on December 21, 2012. Starting in 2009, Adrian Helmsley (Chiwetel Ejiofor), an American geologist, discovers from his counterpart in India that the neutrinos from a massive solar flare are heating up the Earth's core, like a microwave, and that this will cause catastrophic results. Over the next three years, the President of the United States (Danny Glover) colludes with other world leaders to build a bunch of "arks", hidden in the Himalayas near China. While most of the 400,000 spaces in the ships are reserved for notable government officials and selected "important" people, tickets are sold to the private sector for 1 billion Euros per person. (Obviously this is a secret that the average member of the public is unaware of.)

Author Jackson Curtis (John Cusack), who works part-time as a limo driver, takes his kids off his ex-wife's (Amanda Peet) hands for the weekend and brings them to Yellowstone National Park for a little camping trip. There, they encounter the wacky conspiracy theorist Charlie Frost (Woody Harrelson) who is convinced of the 2012 end-of-the-world theory, and claims to have knowledge of (and a map to) the secret ark program. When they get back to LA, Curtis is ordered by his client, the wealthy Russian businessman Yuri Karpov (Zlatko Buric) to bring his kids to the Santa Monica Airport. Apparently, Yuri is one of the rich guys who bought tickets for the ark, and he's gotten the boarding call. Sensing that something is up, Jackson rents a plane, and goes back to collect his kids, his ex-wife, and her boyfriend Gordon (Tom McCarthy). Luckily he shows up to get them just as a 10.5 earthquake starts to destroy much of Los Angeles. They (barely) make it to the Santa Monica Airport, but with the pilot dead, it's up to Gordon - who has taken flying lessons - to fly the plane. They (barely) make it off the ground, and after an exciting disaster sequence, head to Yellowstone where Jackson hopes to get the map to the arks from Charlie.

Of course, Yellowstone National Park is a super-volcano, and is about to erupt. Charlie wants to witness it, but tells Jackson where the map is, in his camper. Jackson (along with his young daughter) rush the camper back to the airplane as the super-volcano erupts. They (barely) make it to the runway, and then (barely) outfly a pyroclastic flow that is destroying everything in their path. They only have enough gas to make it to Las Vegas, where they team up with Yuri to take a large plane to the Himalayas. Timing was crucial, as they (barely) manage to get off the ground before much of Las Vegas is destroyed.

As we follow Jackson and his adventures, we're also following Adrian and his journey from Washington, D.C., along with White House Chief of Staff Carl Anheuser (Oliver Platt) and the first daughter (Thandie Newton), as they make their way to the arks. Some side-diversions to Adrian's father Harry (Blu Mankuma), who performs on a cruise ship, and Nima (Osric Chau) a Buddhist monk whose brother is working on the arks. Will Jackson and his family make it to the arks? What will happen to Harry and the cruise ship? What will happen to the earth when the crust displaces? Will humanity survive the apocalypse? All of these situations are (barely) answered in 2012.

Roland Emmerich knows how to make an entertaining film - that's not disputable. The tension in 2012 is palpable, and while some of the situations are highly improbable, Emmerich knows how to milk every bit of energy out of a sequence. The problem - like many of his films - remains the characters, who are cookie-cutter cliches and utterly disposable. It's hard to feel any kind of emotional attachment to any of them, and the balance of humor mixed in with the horrible disasters occurring around Jackson and his family seems a little misplaced. Running more than 2.5-hours long, the film feels a bit sluggish towards the last third, and might have benefited from some of the more absurd situations being left on the cutting room floor.

What is on screen, however, is gorgeous. The visual effects are top-notch, and 2012 does an amazing job at creating eye-popping sequences of epic destruction. The music, composed by co-writer/co-producer Harald Kloser along with Thomas Wander, is serviceable and does a nice job adding to the tension, but doesn't really stand out much beyond the film. Will the world come to a cataclysmic end in 2012? Only time will tell. But spectacular action sequences and mind-blowing visual effects don't quite work to overcome the flaws in the script and the cheesy characters. 2012 is certainly worth seeing, but not experiencing. Save it for a rental on Blu-ray to enjoy the visuals.