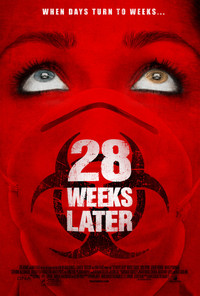 28 Days Later was a very tight horror film. The premise was a bit similar to many of the other zombie movies out there, but this time it\'s a \"Rage Virus\" that spreads through England, turning people into killing machines. At the end of the film, the survivors were waiting for rescue - it was unclear if that rescue ever came.

Now, in 28 Weeks Later, the story continues. The film starts off with a prologue sequence occuring during the initial outbreak. Don (Robert Carlyle) and his wife Alice (Catherine McCormack) are holed up with some survivors, but the rage-infected horde attacks. Don flees, leaving Alice behind to be taken. 28 weeks later, the infected have died off, and refugees are slowly being led back into a quarantined \"safe zone\" in London. A US-led military force is holding things down, nice and secure. Two kids, Andy and Tammy, arrive with the refugees, and are met by their father, Don. He\'s not totally honest about how he abandoned their mother, and what happened to her. So Andy and Tammy, in an effort to get some personal stuff from their house, sneak outside the safety of the green zone and go home to get some things - when they discover that Alice is alive.

Brought back to the military compound, Alice is examined, and it turns out that she is somehow immune to the effects of the virus - but is carrying it in her blood and saliva. Uh oh. You know what\'s coming next - especially when Don arrives to ask for forgiveness. With the virus on the loose, the military implements a \"code red\" crackdown on the human population, and things go from bad to worse. Luckily there are a few military folks who are trying to save the uninfected, and the race is on to escape to the mainland before being killed by the infected - or the military.

The best comparison I can make about this film is that it\'s like how Aliens was to Alien. The first film was a tense horror movie, and the second one was an action-filled thriller. This is not a movie for kids (obviously) as there is some horrific gore and bloody moments. There is not much in the way of acting, since it\'s more of an action movie and less about personal characters and emotional issues. The film wasn\'t directed by Danny Boyle, but he and 28 Days Later screenwriter Alex Garland did produce it. Instead, it was directed by Spanish director Juan Carlos Fresnadillo, and he has a pretty cool visual sensibility, and I look forward to seeing what he does next. The music is by 28 Days Later composer John Murphy, and it\'s a good combination of ambient music and hard rock. I don\'t know if there will be a soundtrack album, but it was a pretty cool score that I really enjoyed in the film.

28 Weeks Later is certainly a niche film. But if you like gory zombie action thrillers, then you\'ll enjoy it. I\'m just curious if they\'ll make a 28 Months Later!