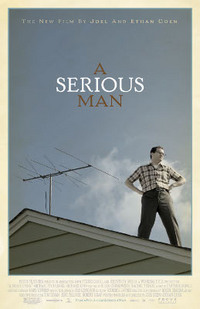 It's nearly impossible to describe a Coen Brothers film. In the case of A Serious Man, it can't be categorized into any particular film genre. Part drama, part comedy, the film opens with a seemingly unrelated prologue that takes place in 19th century Poland, involving a Jewish man, his wife, and a strange traveler. From there we meet Larry Gopnik (Michael Stuhlbarg), a Jewish professor who is raising his family in the suburbs of Minneapolis in the late 1960s. His wife Judith (Sari Lennick) is having an affair, his son Danny (Aaron Wolff) is a pot-head who is addicted to "F-Troop" and owes the neighborhood bully money for the drugs; his daughter Sarah (Jessica McManus) is annoying and possibly stealing money from him, and his troubled brother Arthur (Richard Kind) is sleeping on the couch.

A failing Korean student offers Larry a bribe in return for a better grade, but when Larry tries to return the bribe, the Korean student refuses, insisting that it is not his - and soon his parents are confronting Larry for insulting their honor. Larry is also up for tenure, but that is at risk since someone is writing negative letters to the tenure committee, impugning Larry's character. His son - who is preparing for his upcoming Bar Mitzvah - constantly complains about the roof antennae not working properly to get good reception for "F-Troop", , and his wife - who insists that he move out because it would be "inappropriate" for her to move in with her lover Sy Ableman (Fred Melamed). Faced with all of these troubles in his life, Larry tries to seek council from the various Rabbis in town, but they aren't helpful at all.

I don't want to go any further into the plot, since the film is more about the situations than the resolution. A Serious Man unfolds at a slow but never boring pace, and is all about the characters. Dialogue is clever and interesting, and while there is no real "antagonist" in the film, other than Larry's own inability to stand up for himself, the frustration he feels is quite palpable. A subplot involving Larry's neighbors is a slight distraction, but helps flesh out his character a bit more - there are also plenty of unresolved plot points, or storyline bits that don't seem to go anywhere. This might frustrate viewers, but - like the prologue - I find that it worked - you just need to go with the flow. Aided by a dour and moody score by Carter Burwell, Roger Deakins' cinematography is clean yet provides a bleak and disquieting tone to the film.

A Serious Man is a typical Coen Brothers film - which is to say, it's not your typical film. It might help understand the film a bit more if you're Jewish, I suppose, but the frustration that Larry Gopnik encounters is universal. With no major stars, this film is all about the characters and story, and while it might end on a somewhat unclear note, A Serious Man shows that the Coen Brothers are still in top form.