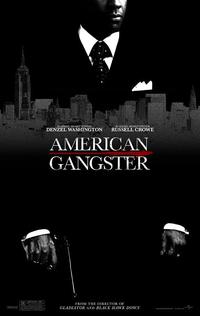 Ridley Scott\'s latest film, American Gangster takes a look at the rise and fall of 1970\'s drug kingpin Frank Lucas, portrayed by Denzel Washington. After the death of his mentor, Lucas starts to take control of his Harlem neighborhood, through force and intimidation. Using his cousin stationed in the army in Vietnam, he manages to get pure heroin smuggled into the country through the military, and his empire grows. Meanwhile, detective Richie Roberts (Russell Crowe) - who unlike many of his fellow police officers is not corrupt - starts working with the newly formed drug task force to take down the drug lords in New York City, and the corrupt cops who extort them.

A truly fascinating story, the film never portrays Lucas as admirable, even though he comes across as a man who tries to do what he thinks is best for his family. The film is set up in such a way that, whether by design or not, any time you start to feel some kind of compassion for Lucas, he will do something reprehensible that will turn you off to his character. That\'s a good thing. Even his mother, played by Ruby Dee, never asks where the money comes from, until things start to get out of hand - and her confrontational scene is excellent. Crowe does a good job as well, as the ostracized detective who is eyed with suspicion because he didn\'t keep the $1 million in drug money that he found. During his investigations, he crosses paths with the very corrupt Detective Trupo (Josh Brolin), who does a wonderful job portraying an extorting policeman. Even Cuba Gooding Jr., in a rather brief role as fellow drug lord Nicky Barnes, and Armand Assante as the Italian mobster Dominic Cattano, turn in great performances.

This is the type of film that feels like it was cut down in post production. It runs over 2.5 hours long, but you can tell that there was a much longer film here. After a confrontation with Nicky Barnes, we never see him again. What happened to him? It\'s a subplot with potential, but it seems to have been dropped only after giving us a tease. There\'s a much more complex story here, and instead of excising story threads in full, we\'re given glimpses of the rest. It would have been better to either give us the full story (a very long film to be sure), or cut out the stuff they aren\'t going to follow through on, since otherwise it feels like they\'re just tempting us with the potential of what it could have been.

The music by Marc Streitenfeld is suitable to the film, but unlike Ridley Scott\'s previous composers, doesn\'t really stand out. There\'s a well done sequence involving the corrupt cops trashing Lucas\' home while Roberts disassembles a military cargo plane that has just arrived from Vietnam, looking for the drugs. It\'s a solid film, that deserves to be presented in a more complete form, but I suppose that\'s likely to happen on home video next year (given Ridley Scott\'s track record).