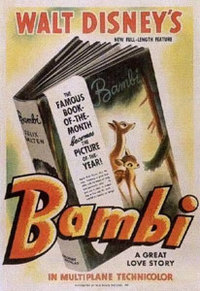 Based on the early 20th century Austrian novel Bambi: A Life in the Woods by Felix Salten, Walt Disney's fifth feature-length animated film Bambi was actually intended to be the second feature from the animation studio.  This environmental story tells the coming-of-age tale of a young fawn, Bambi, as he grows up in the forest.  He makes friends with the various creatures living there, including his close friends Thumper the rabbit, and Flower the skunk, and even a young doe named Faline. His absentee father, the Great King of the Forest rarely appears, so he's taught the way of life in the woods primarily by his mother.  But there's a danger lurking underneath, as Man occasional treads on their domain and soon Bambi has to deal with living on his own.  As he grows into a mature deer and his friends discover love, Bambi doesn't want to get 'twitterpated' - but ends up falling for Faline, an act which itself brings new challenges.

Bambi is considered a classic tale of life, with more honesty than most animated films would have dared to tread.  Emotional and inspiring, Bambi is also a tour-de-force of beautifully painted backdrops and gorgeously moving music. Animated with a sense of realism, years of studying animal movement pays off immensely, and while the animals talk, the film is still used even today as a benchmark for animating creatures.  While it was not considered a financial success upon the original release (in 1942 - the middle of World War II), it was re-issued in 1947, and multiple times over the next 50 years.  Released on DVD in 1997, Bambi now comes to high definition in a stellar Diamond Edition Blu-ray/DVD Combo Pack, and even if you owned the old DVD, this is a must-have release.

As with the other Disney animated features, the good folks at Walt Disney Home Entertainment have spared no expense in making this Diamond Edition release truly worthy of the edition name.  There is no grain at all on this new restored transfer, and while the animation style is decidedly vintage to the time it was drawn, you would be hard-pressed to know that; the film is nearly 70 years old, and yet it looks as though it were shot today.  Colors are lush and deep (the greens of the forest contain so many hues and shades that it's just a feast for the eyes!), and the blacks are dark without losing details in the shadows.  This is, once again, a visual presentation that has been knocked out of the park.

Audio is presented in an English 7.1 DTS-HD HR audio format, which is not lossless, but you would really have to strain to notice a difference; the 2MB/sec audio is quite good. Sound effects aren't really prominent in the surrounds, and what benefits the most from the audio remix is incredibly moving and lush musical score by Frank Churchill and Edward Plumb, which also feature some songs with a chorale.  Additional audio tracks include an English Original Restored Soundtrack (in Dolby Digital mono) as well as French and Spanish Dolby Digital 5.1 tracks. (Even the choral songs are in foreign languages, which are an added perk!)

This Diamond Edition release includes all of the previously released DVD features, as well as a staggering amount of new material - including some rather innovative and somewhat groundbreaking supplements.  First up, you can watch the film with an optional introduction to the film by Diane Disney Miller, and with DisneyView, which puts new artwork from Lisa Keene on the sides, for those who don't want a window-boxed experience. The first major new extra is the "Bambi: Inside Walt's Story Meetings - Enhanced Edition" (HD, 70-minutes) feature.  This lets you watch the film with an interactive picture-in-picture experience that is similar to the "Through the Keyhole" extra on the recent AlIce in Wonderland Blu-ray.  All sorts of aspects of the production, from story development, animation, music, etc., are all explored here, but through an amazing recreation of actual story meeting transcripts with Walt Disney and his team.  Going one step further, at many instances through the experience, you're able to branch out to additional supplementary material, including some classic animated shorts, all in HD. It's a phenomenal extra.  Next up is the truly amazing "Disney Second Screen".  Using the Spot411 technology, you can dig even deeper into the Bambi archives as the movie plays, in sync on your computer or iPad.  It's truly overwhelming, and I can only imagine what this is going to lead to in the future.  Two "Deleted Scenes" (HD, 5  minutes) are included, and an audio recording of a lost demo song, "Twitterpated" (HD, 2-minutes) is also included.  The "Bambi Interactive Galleries" provides a staggering wealth of artwork to sift through. For the kids, there is one interactive game: "Disney's Big Book of Knowledge", which is a book-like exploration of Bambi's forest, where you meet his friends and try to collect stickers through a series of mini-games.

As mentioned, all of the previously released "Classic DVD Bonus Features" are included as well.  Two more "Deleted Scenes" (SD, 3-minutes) are included.  In the documentary "The Making of Bambi: A Prince is Born" (SD, 52-minutes), we get a nice look at the way it all came together.  Much of it duplicates stories told in the Story Meetings feature, but it's presented in a more traditional format here, and looks at the different areas of the production, from Story, to Character Development, to the Actors, the Art Design, the Music, and legacy History of the film.  "Tricks of the Trade" (SD, 7-minutes) is an old archival piece where Walt Disney explains how the multi-plane camera works, as well as his animation approach for the film.  This leads nicely into the classic animated shot "The Old Mill" (SD, 9-minutes), a 1937 Oscar-winning film that took high advantage of the multi-plane camera, as well as environmental animation.  "Inside the Disney Archives" (SD, 8.5-minutes) is a look at the Animation Research Library at the Walt Disney Studios.  Finally in this section, we have the original 1942 theatrical trailer (SD, 2-minutes).

Playful, beautiful, emotional, touching, inspirational - these are all adjectives that describe the film.  It's no secret (in fact, Don Hahn discusses it in the "Making of Bambi" doc) that the film directly inspired The Lion King, and I can only wait with bated breath to see how Disney handles that film when it comes out on Blu-ray later this year. If it's anything like what they've done here, it will be truly amazing. Sporting a gorgeous transfer, beautiful music, a touching story, and a wealth of new and classic supplements, Bambi is one of those classic Disney animated features that deserves a place in every home video library.