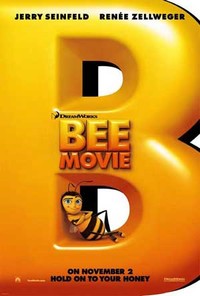 Ever since his hit TV show went off the air, Jerry Seinfeld has been resting on his laurels. Sure he made a go at the stand-up circuit, as documented in Comedian, but other than that, he doesn\'t seem to have been doing much. So when he co-wrote, produced, and stars in a film, it\'s worth taking note. The film in this case is the Dreamworks Animation CGI film, Bee Movie. Having just graduated college, Barry B. Benson (Seinfeld) doesn\'t want to start working right away making honey. Instead, he wants to see the world, and after venturing out on a dare with the Pollen Jocks, he gets caught in a rainstorm and nearly killed, but is rescued by Vanessa Bloome (Rene Zellweger), a human. Barry breaks the cardinal rule of bees, and talks to her (yes, they can talk - they just choose not to!), and soon their two worlds become intertwined as Barry discovers that humans are using the product of the bees\' hard work (honey) for their own enjoyment, and decides to sue the human race. But his actions have consequences, which affect not only the ecology of the world, but also his relationship with Vanessa.

Bee Movie is a cute film. It\'s filled with tons of Seinfeld-styled jokes (including Jewish humor disguised as Bee humor), and unlike many other animated films, doesn\'t rely on pop-culture too much for a gag. Sure there\'s some funny Larry King and Ray Liotta jokes, but those will still stand up years from now. The animation is good, but doesn\'t appear to be groundbreaking, and the voice actors (including Matthew Broderick as the Barry\'s whiny friend Adam, and Patrick Warburton as the bee-hating Ken) are all solid, but not remarkable. Rupert Gregson-Williams provides a full orchestral score, that doesn\'t sound unlike much of the animated efforts his brother Harry has provided for the studio in the past. (There seems to be a tad bit of temp love with Michael Kamen\'s Brazil, used in the film\'s trailers, but it\'s not too overt.)

If you\'re looking for a film which makes you rethink the lives of insects - much like A Bug\'s Life and Antz did previously, then Bee Movie is for you. If you\'re not a fan of Seinfeld\'s brand of humor, you might not enjoy it as much - but I found it to be a smile-inducing and entertaining film.