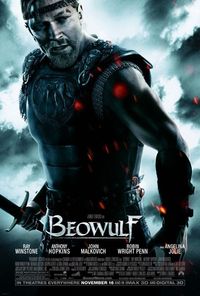 Lately, director Robert Zemeckis has eschewed live-action (or "2D filming" as he calls it) for the virtual 3D realm of CGI animated films driven by motion capture technology.  With 2004\'s The Polar Express, he proved that the technology existed to create a feature film with basically one actor playing a majority of the roles.  Such a move has been a source of consternation for many of his fans, who would love to see him return to a more traditional method of filmmaking.  That\'s not likely to happen anytime soon, with his next film supposed to be a CGI version of A Christmas Carol with Jim Carrey. His latest film, Beowulf, takes the technology to the next step, with multiple actors playing virtual versions of themselves, and even the lead actor playing a character that looks nothing like himself.  The rendering quality has improved, and the motion capture technology is groundbreaking, but there\'s still something about Beowulf that feels just a bit... off.  It\'s probably because they say that the "eyes are the window to the soul", and while they have actually used technology to record the actor\'s eye movements for the virtual versions, they still look... soulless.

Based on the epic ancient poem, Beowulf has two parts.  The first half focuses on Beowulf (Ray Winstone) and his battles with the creature Grendel (Crispin Glover) who has been terrorizing King Hrogthar\'s (Anthony Hopkins) villages. Of course, Grendel\'s mom (Angelina Jolie) becomes involved, and things suddenly get a bit more complex for our hero - who makes an unconventional pact. The second half takes place many years later, and involves (now King) Beowulf\'s battles with a dragon, and I won\'t go into much more detail beyond that because I don\'t want to give too much of the story away.  (Writers Neil Gaiman and Roger Avery did tweak a few things from the original poem to give some of the characters a bit more depth.)

I found Beowulf to be a rather entertaining film, once I got past the quirks of the look of the animation.  Zemeckis uses the camera in exciting ways, methods that would be impossible in a live-action feature.  Theatrically, the film was also shown in 3D, and there are plenty of sequences set up to take advantage of that presentation, with things pointing right at the screen, and lots of motion that would pop off the screen.  Unfortunately, my television is not a 3D screen, so it just seemed a little hammy at times.

Originally released on  HD-DVD and now available on Blu-ray disc, the high-definition release of the film is the "Unrated" edition of the film, which features a lot more violence and blood and gore and sexuality than was (apparently) present in the theatrical cut.  I hadn\'t seen the theatrical cut, so I am unable to say what the actual differences are, but this movie (had it been actually rated) would easily have gotten an R-rating, making it definitely not for kids.

The transfer is from the digital sources, so it\'s a pristine image, with an excellent textural quality and no grain at all. Blacks are solid and deep, and the 1080p transfer seems to have no compression artifacting at all.  The audio on the HD-DVD is presented on the disc in English, French and Spanish 5.1 Dolby Digital Plus, and on Blu-ray the English track is provided in the higher bitrate Dolby TrueHD. The soundscape is loud and immersive, with thundering action sequences, and Alan Silvestri\'s energetic and score sounds great and is never buried by sound effects.

Due to the smaller disc capacity on HD-DVD, Beowulf was originally a 2-disc release, but now it\'s all consolidated on the Blu-ray disc, making switching discs a thing of the past! The only extra on the first HD-DVD disc (which has the feature film) is the "In the Volume" picture-in-picture feature, which shows you what they actually filmed for the movie, as it plays, and it\'s now available on Blu-ray thanks to the BD-Java 1.1 profile update. Since the whole film was all motion captured, it\'s basically B-roll footage of the actors acting out the scenes as the performances were recorded.  It\'s a novel feature, especially since you can see how little they had to work with, but by the nature of the sparseness, it\'s not something to watch through the whole film with, but rather pick your favorite sequences and see how they performed it.  (It should be pointed out that this also highlights the flaws in the animated performances, as many times you can see the live action actors performing with more nuance and emotion than their digital counterparts.)  Previsualization, storyboards, and un-rendered animations are used to accompany certain moments when video footage of the performance captures are unavailable. Interestingly enough, they never show Angelina Jolie doing her performances, and I wonder if there was some legal issue.

The HD-DVD had some "Web-Enabled Features", which only included a "Profiler" that gives some information about the production, cast and filmmakers.  The Blu-ray disc has no such BD-Live interactivity.

The rest of the extras (on HD-DVD Disc Two) starts out with a 24-minute featurette, "A Hero\'s Journey: The Making of Beowulf".  This compact yet information-filled doc explores the whole idea of shooting a film via motion capture, starting with the first day of rehearsals, all the way through final rendering.  It\'s a solid look at the tech behind the film, and there\'s even an "Interactive Mode" for the featurette which provides a very informative pop-up trivia track, with the ability to branch off onto mini-docs to supplement the information.  All of these branching segments can be accessed separately, as well, in the section called "The Journey Continues".  In total, these add an additional 21-minutes of behind-the-scenes material.  Not too shabby!

"Beasts of Burden: Designing the Creatures of Beowulf" looks at the four major creatures created for the film: Grendel, Grendel\'s Mother, The Sea Monster and The Dragon.  It only runs 7-minutes long, which is just scratching the surface of what could have been a more informative doc.  "The Origins of Beowulf" runs a little over five-minutes long, and talks with Zemeckis, producer Steve Starkey and screenwriters Neil Gaiman and Roger Avery about how their story differs from the epic poem.  "Creating the Ultimate Beowulf" explores how Ray Winstone was cast and used to drive a character that looked nothing like him in real life.  "The Art of Beowulf" looks at the production artwork and set design came about to give the film the rather unique look and feel, and runs almost five-and-a-half minutes. "A Conversation with Robert Zemeckis" is culled from a post-screening interview done at USC, where Zemeckis explains a bit more his reasons for delving into this approach to filmmaking.  It\'s informative and runs about 10-minutes long. Finally, there are eleven "Deleted Scenes", all presented as low-resolution animatics, and the film\'s original Theatrical Trailer.  With the exception of the Deleted Scenes, all the supplements are in HD.

Unfortunately there is nothing about Alan Silvestri\'s score, although he can be seen very briefly in the background of the opening of "A Hero\'s Journey", apparently during a visit to the stage.  There is also no commentary track, which would have been a nice inclusion to explain more about how the story changed from the original poem, and the technical challenges facing the filmmakers, but a lot of that is covered on the second disc, just not in the detail that a commentary would have afforded.  Zemeckis has created a visually fascinating world in Beowulf, but at nearly every step along the way I couldn\'t help but feel that this would have been even better if it were live action.  Still, an excellent transfer and solid supplement package makes Beowulf worth checking out if you\'re a Zemeckis fan.