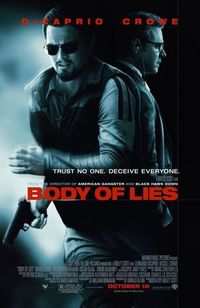 At 75 years old, director Ridley Scott has had a rather formidable and notable career. From such groundbreaking and visionary films like Alien and Blade Runner, to his \"comeback\" with Gladiator and Black Hawk Down, he\'s always tried to present an interesting story from a unique viewpoint, even if the film didn\'t quite work. Lately he seems to be plowing through films faster than one should be at his age, and the result hasn\'t been the best. Some of that is a result of studio tampering (Kingdom of Heaven), and others might just be the story itself (American Gangster). His latest film, Body of Lies, seems to be a hodgepodge of the good and bad aspects of Ridley Scott\'s films, wrapped in what is an interesting story that is flawed by the inclusion of cliched characters and an unnecessary romantic subplot.

CIA Operative Roger Ferris (Leonardo DiCaprio) is in Iraq, on the trail of the notorious terrorist Al-Saleem (Alon Abutbul) when he gets a lead that takes him to Jordan. There he must play a delicate balance of appeasing his controlling (and manipulative) stateside boss Ed Hoffman (Russell Crowe) and the head of Jordianian intelligence, Hani Salaam (Mark Strong) - neither of whom trust each other, especially since Hoffman has a tendency to run side operations that usually mess up the primary ops that Ferris is running. After chasing down a suspect and being attacked by rabid dogs, Ferris meets the beautiful Aisha (Golshifteh Farahani), who he flirts with. When a lead to Al-Saleem is blown due to Hoffmann\'s meddling, Ferris is expelled from Jordan. But he and Hoffman come up with an idea to smoke out Al-Saleem - a plan that might very well put everyone at risk, including Aisha.

Body of Lies is certainly an entertaining film. Based on the novel by David Ignatius, the film slowly unfolds layers of mystery as Ferris hunts for Al-Saleem. The diplomatic tapdance involving Ferris, Salaam and Hoffman is entertaining, and Scott\'s pacing is pretty solid. As Hoffman, an overweight, southern-accent sporting Russell Crowe delivers a humorous portrayal of a manipulator, going through the doldrums of suburban life while giving Ferris advice halfway around the globe. It\'s almost as though his character from The Insider decided to join the CIA after being a whistleblower. He\'s entertaining, but a manipulative son-of-a-bitch who is hard to sympathise for. Similarly, Ferris isn\'t very sympathetic either. DiCaprio does a good job as the frustrated CIA operative, but the romance angle feels tacked on and very much a plot device to get us towards the end of the film. Also, if Hoffmann keeps messing up his operations, why does he keep working with him four more times (over the course of the film)? It seems a bit forced, and probably is the weakest plot point of the movie. But it\'s a major issue. Probably the best role in the film is that of Hani Salaam, and British actor Mark Frost does a great job looking a little like Andy Garcia, but still formidable and quite solid in his portrayal of a man who believes very firmly in trust and the truth.

The music by Marc Streitenfeld works fine in the film, creating a good level of tension especially during some of the more risky missions. The climax of the film includes some unnecessarily graphic violence (cringe-inducing for sure), but that is a minor bit. The portrayal of radical Islamit terrorists as bad guys is a rare thing to see in Hollywood films (and somewhat refreshing) - made even more satisfying by showing that not all Arabs are terrorists, and there are Muslims out there who are trying to combat the same problem - despite Hoffman\'s meddling. Body of Lies is a good film, but not a great film. It has enjoyable moments, but a few character issues and a predictable romantic angle prevent it from being a much better movie.