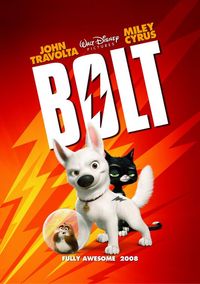 Disney Animation\'s latest non-Pixar foray into the world of computer animated entertainment is the entertaining road-trip movie Bolt.   Rescued as a puppy, Bolt (John Travolta) has been \"modified\" to have superhero powers, with a mission to keep his master Penny (Miley Cyrus) safe from the evil Dr. Calico (Malcolm McDowell), who has captured her father.  When Penny herself is captured, though, Bolt tries to rescue her - and ends up being shipped to New York City.  He then begins a cross-country journey, along with Mittens the cat (Susie Essman) and Rhino the hamster (Mark Walton), using his superhero powers to aid them along the journey.  But there\'s just one small snag; Bolt doesn\'t actually have superhero powers.  Rather, he\'s just the star of a hit television show who has been raised in such isolation so as to believe his powers are real.  As he travels across the county from New York back to Penny in Los Angeles, he also takes a personal voyage and learns more about his nature and his destiny.

Bolt is a fun movie.  It doesn\'t take itself too seriously, and the premise - a dog who thinks he has superhero powers - opens the film up to some rather entertaining and funny situations.  The scene stealers are the pigeons, which are animated delightfully and contain all the various quirks of their locations (the Los Angeles pigeons will have industry folks on the floor!), and Rhino - who, as Bolt\'s biggest fan, is living out every fanboy\'s dream of traveling with their hero.  That Pixar\'s John Lasseter is the executive producer on the film probably has much to do with the strength of the story.  Similarly, music plays an important role, one that composer John Powell delivers in diamonds.  (And the part where Rhino is singing along with the score is priceless!)

Bolt is a bit intense at times, and there is some exciting peril, but overall it\'s good clean family fun.  You feel good when the film ends, and for Disney\'s animated fall release, Bolt is worth checking out.