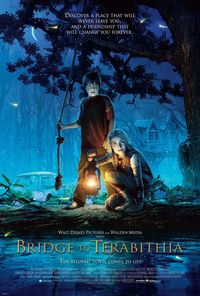 I can\'t recall reading Bridge to Terabithia as a kid, and so - unlike the Chronicles of Narnia or The Lord of the Rings, I wasn\'t sure where it was all going. That isn\'t to say that it wasn\'t predictable - on the contrary, there are a lot of plot moments in this film that are easily telegraphed way in advance. It\'s just that, at the end of the day, I wasn\'t sure what it was all for.

The short version of the plot (warning - spoilers!) is that Jesse (Josh Hutcherson), a 6th grader, is the only boy in a family with five children. His dad is struggling to get by, and doesn\'t support Jesse\'s artistic efforts at drawing. After he befriends the new girl in school, Jesse and Leslie form a close friendship, and build a treehouse deep in the woods behind their homes. Play-acting with a rather fertile imagination, they create a new world they call \"Terabithia\", where they have more control in their lives than they do in the real world, where they are bullied by 8th grader Janice Avery. As Jesse\'s imagination grows, his drawings are noticed by his music teacher (Zooey Deschanel) - who Jesse has a crush on - and she asks him to join him on a field trip to the art museum in the city. When he\'s there, Leslie dies in an accident in the woods, and Jesse blames himself for not being there for her. The film ends with Jesse building a bridge over the creek where Leslie died, and allowing his little sister (whom he had been pushing away to spend time with Leslie) to join him in his fantasy world of Terabithia.

Um okay. So... is it a coming-of-age story? Kinda. Is it a story with parents that don\'t nurture their kids? Yep. Is it a story with an older teacher taking a younger student out on the town, making you wonder if she\'s gonna take advantage of him? Yep. Do the fantasy moments seem entertaining, but completely random and you\'re not sure where reality and fantasy blur? Yep. Does it end and leave you feeling somewhat hollow and unsure as to what the whole point was? Yep.

The music, by Aaron Zigman, was enjoyable and thematic, with a splash of fantasy and contemporary elements. The visual effects were okay, some better than others, and ultimately, Bridge to Terabithia is a kids movie that is best considered for home video. But only if you liked the book, I guess.