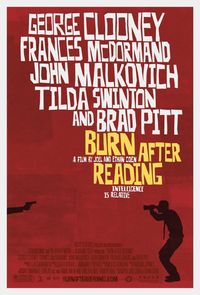 The Coen Brothers have always made interesting films.  Whether they are more character studies or just plain odd, they have ranged from the highly entertaining and absurd (Raising Arizona, The Big Lebowski), to serious and impactful (Blood Simple, Miller\'s Crossing, Fargo).  Their Oscar-winning film No Country for Old Men was excellent, and so it\'s not surprising that they followed it up with a rather goofy adult comedy.  Burn After Reading is like a cross between Fargo and The Big Lebowski, with a dash of CIA intrigue thrown in.  But this film is ultimately about the characters - not the story.

It all starts when CIA Analyst Osbourne Cox (John Malkovich) quits the agency rather than be demoted, and  decides to write his memoirs.  His wife Katie (Tilda Swinton), accustomed to a life of upper-class DC-area shoulder rubbing, finds the idea ludicrous.  She has been having an affair with Treasury agent Harry Pfarrer (George Clooney), and decides that she can do better with Harry than with Osbourne.  Of course, Harry is married himself, and isn\'t sure about leaving his own wife.  When an advanced copy of Osbourne\'s memoirs is discovered at the Hardbodies gym, trainers Chad Feldheimer (Brad Pitt) and Linda Litzke (Frances McDormand) figure out they would return it to Osbourne, and get some kind of reward.  But their dim-witted efforts spiral out of control, and soon they\'re convinced that they have top secret data that they can sell to the Russians.  As the CIA tries to figure out what exactly is going on with Osbourne, Harry meets Linda on a dating site - and soon everyone\'s paths are intertwined, with funny and disastrous results.

Burn After Reading was enjoyable to watch - the characters are all uniquely portrayed (and a bit odd), but ultimately it leaves you with a sense of \"what was the point of that?\" when it finishes.  I particularly enjoyed the relationship between Harry and Katie, if only for the fact that it is a completely different interaction from the last film to feature both Swinton and Clooney, Michael Clayton.  Linda\'s obsession with needing plastic surgery, and Osbourne\'s malicious decisiveness are fun to watch as well.  When things get a little violent (and, oh, they do in traditional Coen Brothers fashion) it\'s a bit surprising but not out of place.  The music by Carter Burwell adds to the humor, with intense percussion and dramatic vivre pushing the comedy forward.  It\'s not something to run out and see, but on home video, Burn After Reading is worth checking out - just don\'t expect anything to linger.