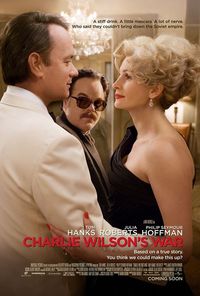 Texas congressman Charlie Wilson apparently singlehandedly won the Cold War. At least, that\'s one way to look at it, and the film Charlie Wilson\'s War (based on the novel of the same name) looks at the extraordinary events that transpired in the mid-late 1980\'s that very well could have resulted in the great Soviet Empire collapsing - all due to the efforts of this one member of Congress. Written by Aaron Sorkin (The American President,\"The West Wing\") and directed by Mike Nichols (The Graduate), the film stars Tom Hanks as Wilson, a philandering Texas congressman who, at the insistence of wealthy Houston socialite Joanne Herring (Julia Roberts) managed to increase the covert operations budget for the CIA in Afghanistan from $5 million to over $500 million in just a few years. Along with the help of CIA division chief Gust Avrakotos (Philip Seymour Hoffman), Wilson sets up joint deals with multiple countries in the region - all under the radar - to supply the Afghan Mujahideen so that they have a fighting chance against the Soviet\'s military power.

The film is a combination drama/comedy, and ultimately a character piece for the three leads. Hanks is great as Wilson, who\'s common-sense approach to situations tends to be politically incorrect and yet highly effective. He drinks (a lot), he sleeps around, and he makes sure his office staff is all beautiful women (including his main assistant Bonnie Bach, played by Amy Adams). Hoffman delivers a performance that is nothing short of brilliant. He\'s funny, he\'s charismatic, he\'s memorable, and he\'s believable. Even Roberts, who I thought was weaker than the others, did a fine job portraying an upscale Texas socialite who wants to help the impoverished citizens of Afghanistan. All of the actors deserve the Golden Globe nominations they received, and more!

Similarly, Aaron Sorkin\'s screenplay is tight and flows effortlessly, with rapid-fire dialogue in the manner of his golden era on \"The West Wing\". It\'s the type of writing that not only works on film, but could easily be envisioned as effective on stage. Nichols\' direction is also quite solid, with his combination of set design, camera work and staging all making it feel like a film that not only takes place in the 1980s, but was actually filmed in that period. It\'s an \"older\" way of filmmaking, but it works. There\'s even what appeared to be a small little \'nod\' to the infamous seduction shot from The Graduate, but I might have been mistaken. James Newton Howard\'s score is pretty decent, with some rhythmic ethnic cues for the Afghan sequences, though I can\'t say that the rest of it stood out in any notable way.

By the end, the film makes it clear that by not following through on the deal with the Afghan people, we ultimately let the militant Islamic Taliban take over. It doesn\'t answer the question of whether it would have been better to let the Soviets stay in Afghanistan, something that Nichols and Sorkin probably don\'t want to address. Charlie Wilson\'s War only runs 96-minutes long; a short film compared to many current releases. But it\'s just the right length to tell the fascinating story about a man who was able to get enough money to fund the covert operations in Afghanistan, allowing the defeat of the Communists, and showcasing some excellent acting.