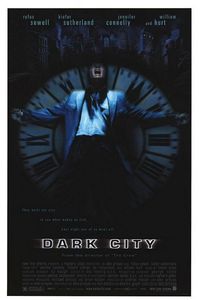 When John Murdoch wakes up in a hotel bathtub with no memory, and only a dead prostitute and a mysterious phone call telling him to run, he begins to unravel the mystery of who he is and the nature of the mysterious "Strangers" that control the city.  It\'s hard to describe Alex Proyas\' dystopian alternate reality sci-fi mystery noir drama Dark City in simple terms; the movie is amazingly layered and yet completely understandable. After Murdoch (Rufus Sewell) finds his wife (Jennifer Connelly), he tries to elude the police and Inspector Burmstead (William Hurt) for the apparent series of murders, he notices that the city is in perpetual night, and seems to be manipulated by "The Strangers", who "tune" the city - changing the architecture and people\'s memories within it - trying to discover the nature of humanity.  Running one big controlled experiment, the Strangers are assisted by Dr. Schreber (Keifer Sutherland) who mixes-and-matches memories to implant into the unaware inhabitants of the city.  When they discover that Murdoch has the ability to "tune", the Strangers set out to eliminate him - before he can change the nature of the experiment.

Originally released as a "Platinum Series" DVD, Dark City now comes to home video as a Director\'s Cut, letting Proyas present his true intended version of the movie.  The theatrical cut of the film gave away a few things with a voice-over narration at the beginning of the film, and in the new Director\'s Cut, there are a few changes, allowing the film to unfold a bit more carefully, fleshing out some of the characters, and letting the audience discover the secrets of Dark City as Murdoch uncovers them.  Thanks to seamless branching, we now have both versions available to enjoy in High Definition.

On Blu-ray, the film is given an exceptional transfer.  Released a year before The Matrix, there are certainly visual (and ideological) similarities that one can note.  Both have that sickly green lighting palette, but Dark City is more inspired by the noir mysteries of the 1940s, and German expressionism, thanks to Dariusz Wolski\'s impressive cinematography.  Darks are solid and clean, and the subtlety in the soft shadows is exceptional. There is a bit of digital noise reduction at times, but it\'s not distracting at all.  Audio is presented in DTS HD Master Audio 7.1, a thunderous track that totally pulls you into the world of the city, sometimes at the expense of dialogue clarity. But that\'s a rare case, and for the most part everything is well balanced and nicely presented in the immersive sound mix. Trevor Jones\' score is equally punchy, and only occasionally gets lost among the sound effects.

Nearly all of the special features from the DVD release are included on the Blu-ray, associated with the "Theatrical Version" of the film.  Two audio commentaries are included for the theatrical cut.  The first one with Director Alex Proyas, screenwriters Lem Dobbs and David Goyer, cinematographer Dariusz Wolski and production designer Patrick Tatopoulos, and the second one with film critic Roger Ebert, who felt that Dark City was one of the best films of 1998.  Two short text essays, "The Metropolis Comparison" and "Neil Gaiman on Dark City" are also included, as well as the original theatrical trailer in HD.  On the "Director\'s Cut" side, which runs about 15-min longer than the theatrical cut, we find three commentaries.  A new Proyas commentary where he enlightens us as to the differences between the two versions of the film, a re-purposed Dobbs/Goyer track, and amazingly enough, a new Ebert commentary about the director\'s cut of the film.  Adding to the mix is a trivia track that explains the differences between the two film versions, a production gallery of 80 images, and an 80-minute documentary that includes an "Introduction by Alex Proyas" (as well as Roger Ebert), "Memories of Shell Beach" (a making-of featurette) and "Architecture of Dreams" (a look at the deeper meaning to the film).  It\'s a fascinating journey to traverse, and nothing is held back.  There isn\'t much in the way of behind-the-scenes footage, sadly, so it\'s mainly comprised of talking heads and photos, but it\'s definitely a great exploration into the film\'s background, creation, release and reaction.

Dark City is one of those films that offers something new to discover every time you see it, and with the Director\'s Cut, there\'s even more subtle changes and elements that will let you see the film in a whole new light. The transfer is great, though not perfect, and the extras are plentiful. This is a no-brainer, and a must-see Blu-ray.