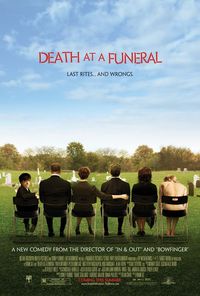 Death at a Funeral

Review: Death at a Funeral

Frank Oz is one of those guys who not only had a great career as an actor, but also managed to pull off a directing career as well. Showcasing his skills at working with puppeteers in The Dark Crystal and Little Shop of Horrors led to straight up comedies like Dirty Rotten Scoundrels and What About Bob?, and even some dramatic entries like The Indian in the Cupboard and The Score. His last feature film was a recognized flop: the remake of The Stepford Wives, though I found there to be some elements of the film worth checking out. His latest film is a return to the Dirty Rotten Scoundrels school of comedy, but even less Hollywood. Death at a Funeral is a British farce that could easily have been a stage play.

Daniel (Matthew McFayden) is fretting over the eulogy he must deliver at the funeral of his father, concerned that it won\'t live up to something his brother Robert (Rupert Graves), a renowned author, could have written. Things start to go wrong when the wrong casket arrives. Two of Daniel\'s friends are sent to pick up the elderly, foul-mouthed wheelchair-bound Uncle Alfie (Peter Vaughan), with much difficulty. Daniel\'s cousin Martha (Daisy Donovan) and her fiancee Simon (Alan Tudyk) pick up her brother Troy (Kris Marshall), who is studying to be a pharmacist. Simon is nervous about meeting with Martha\'s father, and takes what he thinks is Valium - but is actually one of Troy\'s experimental designer hallucinogen drugs. By the time they all arrive at the funeral, the drugs have started to kick in, and things start going badly. But as if that wasn\'t enough, Peter - a midget who none of the family have met or heard of before - reveals to Daniel that he had a gay affair with the deceased, and demands money or else he\'ll announce it to the family.

There is a lot more going on here, and the film never slows down. As is typical in British humor, the comedy comes from the situations and the behavior of the characters in reacting to the situations rather than clever dialogue, though there are some very funny lines. Frank Oz keeps things tight, and the 90-minute film breezes by with plenty of laughs along the way. The actors all do good jobs in their respective roles, and Murray Gold\'s whimsical score keeps the film playful and jaunty.

It\'s not a deep film full of philosophical meaning or anything like that, but Death at a Funeral allows us to laugh at death, relationships, and the human condition, and not feel at all guilty about doing it.