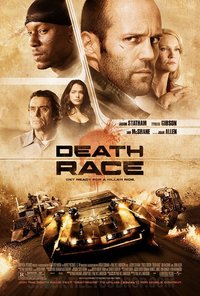 Let\'s be honest here - the idea of remaking a Roger Corman film seems like it could go either way. It\'s hard to imagine that a remake of something so schlocky could be worse than the original film, but yes, it can go that way. But if you\'re lucky, you have something that improves upon the original. In the case of Death Race, the remake of 1975\'s Death Race 2000, it does both. The idea of "Death Race" is kept, but implemented in a way that leaves the viewer both entertained and shaking their heads at the absurdity.

In the near future, "Death Race" is created by corporations who now own the prisons (due to a blooming criminal population). The idea is that there\'s a no-holds-barred three-stage race, and when you win the race five times, you gain your freedom. But so far, no one has ever won. When former race-car driver and out-of-work iron worker Jensen Ames (Jason Statham) is framed for the murder of his wife, he\'s sent to Terminal Island. There, he is asked by the warden (Joan Allen) to take on the persona of "Frankenstein", a Death Race driver who was killed six months earlier during the last Death Race. Since Frank had won four races, all Jensen has to do is win one race, and then he\'ll gain his freedom - and be reunited with his baby daughter.

But as Jensen soon finds out, the prison population is a rough crowd, rivalries run rampant, and sabotage isn\'t beneath anyone - as long as it keeps the viewer ratings high. With the help of his crew pit, led by "coach" (Ian McShane) and his sexy female felon navigator Case (Natalie Martinez), Jensen tries to work his way through the races, dealing foremost with Frank\'s main rival Joe "Machine Gun" Viterbo (Tyrese Gibson). When Jensen finds out that the man who framed him for his wife\'s murder is in the race - and that he\'s part of a larger conspiracy - things get bloody and heads will roll.

Death Race is pretty much non-stop carnage and absurdity, wrapped in a gritty filming style that punches you in the gut and keeps the adrenaline pumping. It\'s not the worst of films - believe me, I\'ve seen some serious crap in my day - but it\'s not exactly high art either. Directed and written by Paul W.S. Anderson (the director who brought us Mortal Kombat and Alien vs. Predator among others), the film has some worthwhile chase sequences that are hindered by the shamefully bad dialogue and eye-rolling storyline. Nothing is unpredictable here, but that doesn\'t mean you can\'t have fun watching it. I don\'t like to go to movies where you have to check your brain at the door just to enjoy it, but Death Race is that kind of film. I\'ve got nothing wrong with that - it\'s not like they were advertising the film as anything other than what it is. To that end, it\'s not that bad. There are a few gross-out moments that will have audiences either cheering or groaning, and Paul Haslinger\'s industrial score keeps the energy at a high octane level (when you can hear it under the sound effects).

If you\'re looking for a touching story about a man\'s efforts to achieve justice on those who framed him and reunite with his daughter, Death Race might not be the best film to watch. But that\'s still the gist of the storyline, and it\'s all wrapped in a pumped up coating of grimy and flashy action. You could do worse, but you could also do better.