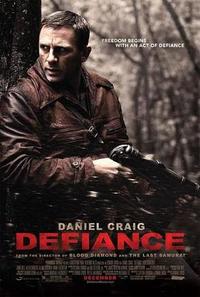 Defiance tells the World War II tale of three Jewish brothers who hide from the Nazis by living in the woods, and in alliance with Soviet partisans, perform raids while trying to survive.  The Bielski brothers - Tuvia (Daniel Craig), Zus (Liev Schreiber) and Asael (Jamie Bell) - hide in the forest when their parents and neighbors are slaughtered by the Nazis.  Soon they have a small gathering of other refugees, and start to build a camp.  Taking the leadership role naturally, Tuvia manages to get a weapon from a supportive villager, and in an act of revenge, kills the local official who has been turning in Jews to the Nazis.  When a conflict ensues between Tuvia and Zus over how aggressive they need to be against the Germans (Tuvia would rather take a defensive role, and Zus wants to go out and kill proactively), Zus leaves the camp - which has grown substantially - to join the Soviet partisans who are also in the woods.  As the refugees deal with the onset of winter (and typhus), Tuvia faces a challenge to his leadership, and Asael works to win the heart of one of the ladies in the camp.

Directed by Edward Zwick, Defiance tells the story in an interesting way, and overall it\'s a pretty well done film.  The problem is that the story starts out with the Nazi raid on the village, so we never get a chance to know the brothers in their \"normal\" lives, to see how the sudden displacement changed their characters and temperments. All of the actors are speaking with an eastern European accent, and it gets a little confusing as to who is who - the names don\'t quite stick to the characters (especially with the numerous supporting roles).  Still, the challenges they faced in the woods are effectively portrayed, and one can certainly appreciate the amazing stuggle they endured as they survived in the woods, and built a community under the radar of the Nazis, who were hunting for them.

The acting is overall fine, but nothing great - there are a few forced moments that were a little hammy, but it\'s not a dealbreaker.  The music, composed by James Newton Howard, is like The Village II: The Shtetl.  Using acclaimed violinist Joshua Bell, the music has a strong eastern European Jewish edge to it, and works fine in the film, never feeling over-the-top or too schmaltzy. Defiance is an interesting movie that tells a little-known story of survival and heroism during World War II.  It\'s worth checking out, but there are better WWII films out there; this one might be better served on home video.