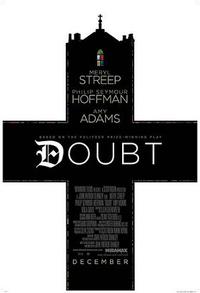 Doubt is based on the Tony-winning play by Oscar-winning screenwriter John Patrick Shanley.  Set at a Catholic School in the Bronx in the fall of 1964, the story swirls around the concerns that Sister Aloysius Beauvier (Meryl Streep) has regarding Father Brendan Flynn (Philip Seymour Hoffman) and his seemingly inappropriate relationship with the school\'s first (and only) black student, Donald Muller (Joseph Foster).  When the younger Sister James (Amy Adams) first notices some odd behavior in Donald, she brings it to Sister Aloysius\' attention.  Soon Aloysius is on the hunt to dig up the truth - at the risk of her own career, and Flynn\'s - but her stone-faced certainty might be a cover for something more.

Directed by Shanley based on his own adapted screenplay, you can\'t ask for a better director to handle the material.  Multiple issues are explored in the film, from trust, to abuse, to racism, to homosexuality, and even religion and faith.  It\'s a compelling film that actually does little to give solid answers as to the actual facts of the events that are purported to have taken place. Instead, the audience is left at the end with a lingering question - one that is certain to be thought provoking and spark discussion among the viewers of the film; some would side with Father Flynn (who maintained his innocence), and others would side with Sister Aloysius (who insisted on his guilt).  A small but emotionally powerful performance by Viola Davis as Donald\'s mother is certainly worth noting as well. Roger Deakins\' cinematography is cold and naturalistic, and Howard Shore\'s musical score is intimate and subtle, but doesn\'t stand out as anything amazing; it\'s kind of like a smaller visit to The Last Mimzy.

With a powerhouse of acting talent on the screen, the film is engaging and the small ensemble cast all deliver excellent performances.  Sprinkled with a dash of humor among the serious issues raised in the film, the pace and writing is top notch.  If you\'re looking for a thought provoking drama with excellent acting, Doubt is likely the film to see this winter.