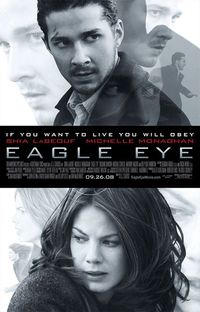 Ahh yes, the fall movie season arrives in style with a new spin on the typical government paranoia film, Eagle Eye. Supposedly inspired by an idea by Steven Spielberg, the movie (written by John Glenn, Travis Wright and Hillary Seitz based on an original screenplay by Dan McDermott) follows Jerry Shaw (Shia LaBeouf), a slacker who is framed for terrorism following the death of his twin brother who was in the military, and Rachel Holloman (Michelle Monaghan), a single mother whose son\'s life is at risk. Both of these protagonists are being manipulated by a mysterious female voice on a telephone who seems to be able to see everything going on, and tells them what to do, if they want to live. Meanwhile, Homeland Security team leader Thomas Morgan (Billy Bob Thorton) is trying to track down Shaw, who escaped custody with the assistance of the \'mysterious voice\', and soon everyone is caught up in a government conspiracy that could affect the entire chain of command.

Eagle Eye plays like a new version of Enemy of the State with a splash of The Manchurian Candidate. It borders on absurd about 99% of the time, with some truly outrageous \"coincidences\" that allow for the story to proceed. The idea that the \'mysterious voice\' could see everything at once makes sense (once you discover who it is), but just because you are all-seeing doesn\'t give you the ability to predict the future. It\'s just a level of absurdity that diminishes the otherwise enjoyable tension in the film.

Director D.J. Caruso delivers a slick and energetic movie, so it\'s never boring, but the \'twist\' towards the end is a head-shaker, and occasionally the film suffers from shaky-cam syndrome, preventing the audience from truly enjoying the good choreography and stunts. The music by Brian Tyler is exciting and strong, helping propel the action forward, in an almost unrelenting fashion.

Steven Spielberg was to direct Eagle Eye, but instead directed Indiana Jones and the Kingdom of the Crystal Skull. I am not sure that his version of Eagle Eye would have been any better than Caruso\'s, but I\'d rather have had a bad Spielberg sci-fi thriller than a classic franchise ruined with a bad sequel. Eagle Eye might not deliver anything truly amazing, but in terms of escapist fare, it\'s not bad entertainment - it\'s just not smart.