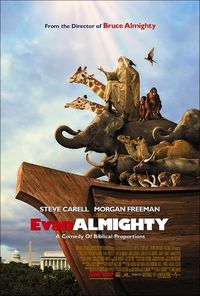 What do you get with the most expensive comedy (rumored at $210 million) ever made? Not a whole lot, and that\'s the problem with the pseudo-sequel Evan Almighty. The first time around, in Bruce Almighty Jim Carrey played a man who complained about God so much that God decided to let him try his hand at the reigns for a bit. It was a funny, but ultimately forgettable film. This time, God (played by Morgan Freeman) decides that newly elected congressman Evan Baxter (Steve Carell) is going to have to live up to his promise of \"changing the world\", by building an ark.

It takes a bit of convincing before Evan starts to embark on his new mission from God, but by shirking his congressional duties, he earns the ire of Congressman Long (John Goodman), with whom he was junior co-sponsoring a bill that would allow parts of national parks to be privatized and developed. Soon Evan is looking like Noah, animals follow him, and everyone thinks he\'s crazy. Is there really a flood coming? Will Congressman Long stop him from finishing the Ark? Will his family survive? Does anyone care?

The biggest problem with Evan Almighty is that it sacrifices comedy and humor for the \"message\". In this case, the message is a noble one of conservation and environmentalism, but it\'s done in such a way that the film feels more preachy than entertaining. Sure the visual effects are decent, and there are some funny moments - but the story and script are overly predictable, and there\'s no sense of fun like there was in Bruce Almighty. Evan has no powers; he just builds a really big boat.

John Debney\'s score is epic when it needs to be, and standard comedy fare when it\'s not playing up the emotional angle for the family drama sequences. It probably will work better on CD, but there weren\'t any themes that stuck with me when I left the theater. For over $200 million, I would have expected something a little more than what ended up on the screen, and it will be interesting to see if Evan Almighty will not sink at the box office.