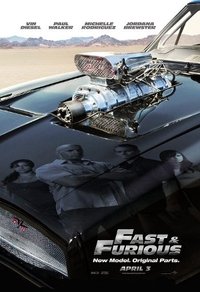 In 2001, The Fast and the Furious blazed onto the big screen. Director Rob Cohen’s underground street racing crime flick was a huge financial success, though critically mixed. After a terrible sequel and a mediocre third film in the series, the filmmakers have gone back to the original cast. This one, appropriately titled Fast & Furious, starts out with a prologue sequence featuring Dom Toretto (Vin Diesel) leaving his girlfriend Letty (Michelle Rodriguez) and his gang after a successful run hijacking fuel tankers in the Dominican Republic. Now (an undetermined time later), Dom gets a phone call from his sister Mia (Jordana Brewster), informing him that Letty has been murdered. He returns to Los Angeles, and evidence leads him to a mysterious drug lord named Arturo Braga. Braga, it seems, is being investigated by the FBI for drug running between Mexico and the USA, with FBI Agent Brian O’Conner (Paul Walker) on the case. When he and Dom cross paths again, they both go undercover to infiltrate Braga’s operation. There is still some question as to who Braga is, and O’Conner’s superiors want him to capture Braga, while Dom is seeking revenge for the Letty’s death.

The plot is pretty straightforward and actually implemented rather cleanly. Directed by Justin Lin, who directed The Fast and Furious: Tokyo Drift, the storyline plays out smoothly and with few hiccups, even if some of the story and acting are cliched and predictable. There is a good balance of action scenes, and for the most part the stunt driving is well executed, although there are a few instances of over-reliance on CGI and visual effects. The high-octane music by Brian Tyler helps propel the action forward, and while the film isn’t as good as the first in the series, Fast & Furious is certainly better than the other two sequels. It’s entertaining escapist fare, but not much more beyond that.