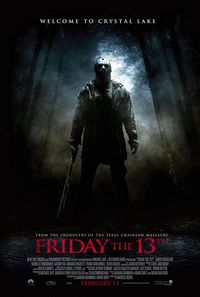 Ah yes, Platinum Dunes is back at it again! Michael Bay\'s production company has taken to remaking most of the classic horror films of the 1970s and 1980s, and no franchise is safe! They started with The Texas Chainsaw Massacre, moved on to The Amityville Horror and now take on Friday the 13th. (Next up is A Nightmare on Elm Street - goodie!)

Everyone knows the basic story from the original film. It\'s June 13th, 1980, and someone is terrorizing Camp Crystal Lake, chopping up and basically dispatching the counselors. Of course, as we find out at the end, it\'s not a the hulking hockey mask-wearing, machete-weilding, teenager-killing psychopath, but rather Mrs. Vorhees taking revenge for the death of her son Jason. All of this is pretty much re-enacted in the pre-title sequence. So the remake of Friday the 13th is about 5 minutes long. Then we get the remake of Friday the 13th Part II, which takes in \"present day\", when a group of horny college kids come to the lake following a tip for a rather large natural crop of marijuana. But there is something in the woods and living in the abandoned ruins of Camp Crystal Lake - a hulking machete-wielding psychopath with a burlap bag over his deformed head. After killing off the ground of teenagers, the movie (finally) starts getting into the main storyline, which takes place six weeks later.

Clay Miller (Jared Padalecki) is searching for his sister, who went missing six weeks earlier. He comes across a group of college kids, led by the egocentric shallow fratboy Trent (Travis Van Winkle) who is taking his friends to his dad\'s vacation home on the lake (to impress them). Along with his girlfriend, another couple and two stoner friends is the more normal and compassionate Jenna (Danielle Panabaker), who agrees to help Clay check out the far-side of the lake - over Trent\'s protestations.

Of course, Jason is out there, and dispatches of a few of the college kids and even a few locals - one of which takes place in the storage area of a barn and results in Jason\'s burlap bag being torn. Handily, there is a hockey mask in the storage area, so now his get-up is complete. The rest of the film involves Clay and Jenna trying to find Clay\'s sister, while evading Jason - who is taking out the rest of the group.

Directed by Marcus Nispel, the film is pretty much what you would expect. It\'s spattered with references and nods to the original films (the plot ultimately borrows from the first four films), and while the kills aren\'t the most inventive, they\'re done effectively and in an appropriately \"startling\" way that helps the tone, and makes it fun for the audience. It\'s shot in a gritty way, much like the other Platinum Dunes remakes, and as one would hope for these kinds of films, there is a bit of gore (but not too much - nothing like the Saw films), and even a bit of nudity to keep the audience\'s attention. The music by Steve Jablonsky adds to the creepy factor, and appropriately uses the \"Kill Kill Kill, Mommy Mommy Mommy\" thing that original composer Harry Manfredini established for the original series.

Friday the 13th won\'t reboot the series in the same way Casino Royale did for James Bond, but it\'s a bit of horror escapism in the middle of February. If you\'re interested in seeing it, you can probably hold out for home video, but really you should just watch the original one.