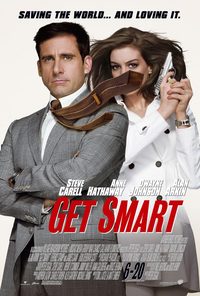 I never really did watch the original television series \"Get Smart\" on a regular basis. Sure I\'d seen the odd episode here and there, so I was familiar with the basic premise of the classic Mel Brooks/Buck Henry comedy. So when they made a new film version, it was not with the highest of expectations that I went to go see it, since Hollywood\'s track record of adapting old television shows into feature films has been a mixed bag at best. This time around, however, I was pleasantly surprised.

Get Smart follows the adventure of CONTROL analyst Maxwell Smart (Steve Carell), who finally achieves his dream of upgrading to Agent status, but only after the headquarters have been attacked by KAOS. Teamed up with the sultry and beautiful Agent 99 (Anne Hathaway), Smart must find out what happened to some stolen nuclear materials, and prevent KAOS operative Siegfried (Terence Stamp) from pulling off his evil plan. In the process, Smart has to deal with his boss The Chief (Alan Arkin) and his idol, the suave Agent 23 (Dwayne \"The Rock\" Johnson). The problem is, Smart is a bumbling fool. But through his stumbling around and causing mayhem, he manages to get the job done, impressing everyone around him despite his faults.

Get Smart is the type of comedy where the humor doesn\'t come from spoofs or mocking pop culture references, but rather, just old-fashioned humorous situations. The jokes in Get Smart seem greatly derived from the original television show - which is also treated with reverence and respect. The shoe-phone makes a prominent appearance, as well as the classic television show theme amidst Trevor Rabin\'s rocking and bombastic musical score. The problem is, since many of the jokes feel like they\'re from the show, the film just feels.... old. It\'s smirk-inducing to see Smart smack into a wall and say \"Missed it by... that much!\", but it doesn\'t feel original or fresh. It was nice that Brooks and Henry were consulted on the film, and their involvement makes it much more respectable, but that doesn\'t make it a better film.

All of the actors seem comfortable in their element, and Hathaway is particularly fetching in her costumes, all designed by Oscar-winner Deborah Lynn Scott. Director Peter Segal did a nice job with the action sequences, which are well choreographed. I particularly enjoyed the skydiving sequence which seemed (at times) to use actual stunt skydivers - sadly something that seems rarer and rarer these days. I enjoyed the film overall, but it\'s not the type of movie to rush out and see. It\'s more of a rental, but one you should snag after you check out the first season of \"Get Smart\", which will be on DVD later this summer.