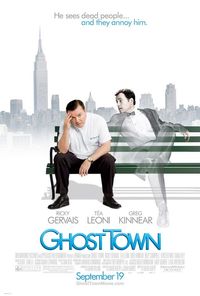 Ghost Town features Ricky Gervais as a socially withdrawn dentist who - after dying for seven minutes during a colonoscopy - now has the ability to see dead people.  No, it\'s not a comedy version of The Sixth Sense, but Ghost Town does play like a combination of \"Ghost meets Scrooged\".  When Bertram Pincus (Gervais) discovers his ability, it\'s more a nusiance than anythin - all the dead with unfinished business try to get his attention to help them out, but he won\'t have anything to do with him.  Ghost Frank Herlihy (Greg Kinnear) was killed by getting hit by a bus, and wants Bertram to help break up his widow Gwen\'s (Tea Leone) impending marriage to a philanthropic human rights lawyer (Bill Campbell).  His scheme is to get Bertram to catch Gwen\'s eye - but when Bertram starts to fall for Gwen, things start to get complicated.

Directed by David Koepp, and written by Koepp with John Kamp, Ghost Town suffers from a rather unfortunate bout of predictability and unlikable characters.  It\'s hard to imagine Ricky Gervais in the romantic lead of anything, and it certainly doesn\'t work here.  He\'s an unlikable jerk for most of the film, only softening up at the end, but it\'s hard to feel any compassion for him.  Kinnear\'s character is a two-timing smarmy guy who cheated on his wife, and so it\'s hard to feel sorry for him too.  In fact, the only person who is worthy of any empathy is Tea Leone.  Gervais saves the movie by being funny, but funny isn\'t enough to make it worth rushing to see.  One performance outshines even Gervais, though, that of \"Saturday Night Live\" cast member Kristen Wiig as the surgeon who accidentally killed Gervais during the procedure.  Framed by Geoff Zanelli\'s whimsical and at times emotionally tinged score, Ghost Town misses the mark, but might find a life on home video.