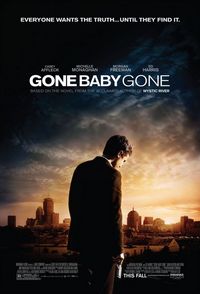 After young Amanda McCready goes missing, the Boston police are on the case, searching for her. But her aunt and uncle don\'t think they\'re doing enough, so they seek the help of Patrick Kenzie (Casey Affleck), who is known for finding missing people - and for talking to people who won\'t talk to the cops. He and his girlfriend/partner Angie (Michelle Monaghan) start to look into the case, they are teamed up with police detectives Remy Bressant (Ed Harris) and Nick Poole (John Ashton) at the insistence of Captain Jack Doyle (Morgan Freeman). But as they dig into the case, they uncover more than they bargain for, where professional and personal scruples are put to the test, and some big morality questions are asked, with lives on the line. Gone Baby Gone is a film adaptation of a novel by Mystic River author Dennis Lehane, and like Mystic River, features a missing persons case with lots of hidden layers that are explored.

In his directorial debut, Ben Affleck has done a commendable job at balancing the mystery of Amanda\'s disappearance with nuanced character performances and a complex storyline with interwoven threads that slowly plays out in an engaging fashion. Casey Affleck does a very good job in his role as the conflicted investigator, and while he might slur his words a bit, you get a sense that his casual approach comes from being comfortable with the character. All the actors do commendable jobs, Written along with Aaron Stockard, Ben Afflecks screenplay is well crafted, never revealing too much to the audience to let them get ahead of the story, but planting the seeds of what is to come well in advance.

The musical score by Harry Gregson-Williams provides the right amount of emotion, adequately servicing the film, and never becomes too heavy-handed during the dramatically intense sections. Oscar-winner John Toll\'s cinematography is also understated, shooting the overcast Boston area in grey cold tones. The whole film goes to show that some talent is best realized behind the camera, and Gone Baby Gone might just be the beginning of Ben Affleck\'s new career.