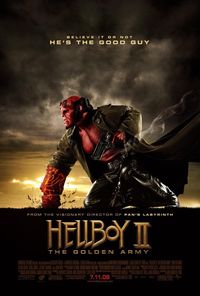 When Hellboy came out a few years ago, I was an immediate fan of it. Sure it wasn\'t a perfect film, and the second half slogged down a bit, but I found the snarky "Oh crap" mentality of Hellboy and his fellow BPRD (Bureau for Paranormal Research and Defense) team members to be refreshing, since it never seemed to take itself too seriously. Now, of course, director Guillermo Del Toro is a highly acclaimed director, even having the coveted "visionary" label bestowed upon him for his work on Pan\'s Labyrinth. Now he\'s banking on that street cred to go back to Hellboy - at a different studio, no less - and show us how much fun he can have without the shackles of a studio hindering his creativity. The resulting film, Hellboy II: The Golden Army is filled with Del Toro (and Hellboy creator Mike Mignola)\'s creative and wild imagination, but it gets lost amidst the flashy visual effects and eye-popping character design. But it\'s still a really fun ride.

Taking place an undetermined span of time after the events in Hellboy, the film starts off with a small prologue that allows the character of Dr. Bruttenholm (John Hurt) to return, as he tells a child-aged Hellboy a story about the ancient battle between Elves and Man, and how a deadly mechanical "Golden Army" (controlled by a golden crown) would have destroyed man, but for the realization by the Elf King that he created a terrible thing, and offered a truce, and the army was locked away for good. Of course, that\'s just the backstory, as it turns out that the Elf King\'s banished son, Prince Nuada (Luke Goss) is planning now to overthrow his father\'s throne and take control of the Golden Army to eliminate mankind once and for all.

Meanwhile Hellboy (Ron Perlman) is having some relationship issues with his fellow BPRD girlfriend Liz (Selma Blair), and when investigating an attack on an auction - where Nuada stole a piece of the crown that controls the Golden Army - Hellboy ends up blowing BPRD\'s covert undercover status. In response, the government suits send over a new guy, Johann Krauss (voiced by Seth McFarlane), to join the team (which also includes the aquatic Abe Sapien (Doug Jones)). This Kraus is made of ectoplasm and lives in a suit that he controls. He\'s also a stickler for following the rules, which doesn\'t jibe well with Hellboy\'s rambunctious bad-boy personality. As the BPRD team members dig deeper into the auction attack, they find out Nuada\'s plan, and soon - with the help of Nuada\'s twin sister, Princess Nuala (Anna Walton) - they\'re on a race to stop him from unleashing the Golden Army and destroying mankind.

The movie has a pretty brisk pace, never slowing down for too much exposition, and Del Toro does a nice job re-introducing us to Hellboy and his co-workers, which is good because it\'s likely that not as many people who see this film saw the first one. The action is fun, and the creature design (especially as witnessed in the Troll Market) allowed Del Toro\'s imagination to run wild. There are some nice character moments as well, but there was a rather odd sense through the whole film that things were either rushed, or not fully explained, or dumbed down a bit just to make it a tad more accessible to the general public. This is most apparent towards the end of the film when Princess Nuala makes a decision that she could have done earlier and saved everyone from a lot of grief. It\'s also a little confusing why Abe Sapien - who is a water-based being- is never actually shown in the water. Odd. (Incidentally, this time he is voiced by Doug Jones, instead of overdubbed by David Hyde Pierce, who provided the voice in the first film.)

The music was done by Danny Elfman, and his score was big and punchy and worked nicely in the film. He didn\'t use the theme that Marco Beltrami had done for the first film, which isn\'t surprising, but he also doesn\'t really give us a big memorable theme of his own. Instead, we get a bunch of smaller themes and motifs, all of which work fine, but I find myself wishing for Beltrami\'s melody in a few sequences. The visual effects are quite good as well - the sequence involving the Elemental is quite nice, and the Angel of Death design is very cool.

I don\'t have any real issues with the film - it\'s a fun bit of entertainment, but it doesn\'t have as intricate a story as the first film, and at times it felt like Del Toro was going a bit overboard with the eyecandy. The characters are fun, and it\'d be interesting to see if they can get a third film going at some point, pending box office success. Ron Perlman certainly is the highlight of the film, and Seth McFarlane\'s vocal performance was brilliant. I\'d easily recommend the movie, and it\'s worth seeing if you can\'t get into your 38th showing of The Dark Knight.