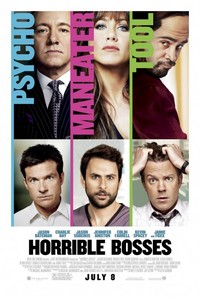 Anyone who has ever worked for someone else has likely had a moment where frustration built to the point where homicidal fantasies started occurring. (If not, you have the best boss ever and should never quit!) The idea of offing one's boss isn't new, especially to cinema. The 1980s comedy 9 to 5 pops into my head when I think about those types of films, and now I can add Horrible Bosses to the list. In this case, instead of three co-workers conspiring to rid themselves of a sleazy boss, we have three friends who seek to have all three of their bosses whacked. Nick (Jason Bateman) works very hard for his boss Dave Harken (Kevin Spacey) at a financial firm, in hopes of attaining a promotion; Dale (Charlie Day) works as a dental assistant to sultry dentist Dr. Julia Harris (Jennifer Aniston); Kurt (Jason Sudeikis) works as an accountant for Jack Pelitt (Donald Sutherland). But things aren't so good - Dave screws over Nick and takes the promotion for himself, Julia threatens to blackmail Dale by telling his fiancée that they slept together - unless they sleep together, and Jack dies leaving the company in the incapable hands of his drug-addled son Bobby (Colin Farrell). Now things are even more miserable, and the three friends decide that the best thing to do would be to have their bosses offed. In the process of finding a hitman, they find a "murder consultant" (Jamie Foxx) who suggest that they each kill each other's bosses (in the manner of Strangers on a Train). Things don't go exactly as planned, and soon the trio find themselves trying to get out of being framed for murder.

There are parts where the film feels a bit slow, but it's the actors that drive the film; under the direction of Seth Gordon, Horrible Bosses is a solid ensemble comedy. Bateman, Day and Sudeikis have a great dynamic, with plenty of funny banter and some hysterical (ad-libbed?) lines that make even the most absurd situations seem plausible and natural. The bosses are clearly having a blast, with Farrell wearing a terrifically bad hairpiece, Spacey being devious and mean, and Aniston playing against type as a manipulative seductress. And let's not forget Jamie Foxx as "Motherf***er Jones", a downright brilliant role from the Oscar-winning actor. The score by Chris Lennertz is fun and energetic, primarily rock-band based, playing out the tension of the scenes and driving the characters forward. In all, Horrible Bosses is a fun fantasy romp about what it would be like to get rid of some truly terrible human beings.

Considering that Horrible Bosses is a 2011 film, the visual presentation on Blu-ray is perfectly fine. Not the most impressive showcase of your ginormous HDTV, but details are clear; there are no artifacts from digital compression or excessive noise reduction of note. Colors are slightly desaturated per the filmmaker's palette choice, but overall it's an adequate and accurate representation of the film on home video. Audio is presented as a rather front-heavy English DTS-HD Maser Audio 5.1 track. Since the film is primarily dialogue-driven, it's not really that much of an immersive experience and the mix reflects that, with only occasional use of the surrounds. The punchy and fun band-driven score by Chris Lennertz is given a nice presentation, helping drive the action and push the comedy. In all, a satisfactorily average presentation.

Released on Blu-ray, we are given two versions of the film - the theatrical release, and an extended unrated edition that runs about 8-minutes longer. Instead of using seamless branching on one disc, each version is given its own disc, with the unrated version sitting alone on the first disc, and all the supplements paired up with the theatrical version on the second disc. We don't get a commentary track, but instead get a small selection of behind-the-scenes featurettes. First up is "My Least Favorite Career" (HD, 5-minutes) in which director Seth Gordon and the cast talk about their own 'Horrible Bosses'. "Surviving a Horrible Boss" (HD, 6.5-minutes) continues the trend of discussing real life scenarios with the three lead actors and director Gordon imparting some advice on how to handle a horrible boss situation. (Don't try their suggestions at home!) "Being Mean is So Much Fun" (HD, 7-minutes) features actors Kevin Spacey, Colin Farrell and Jennifer Aniston talking about what it was like for them to become Horrible Bosses.

"Deleted Scenes" (HD, 10.5-minutes) features two alternate openings; a new scene between Donald Sutherland, Jason Sudeikis and Colin Farrell; an alternate death fantasy featuring Kevin Spacey; a funny moment with Farrell at the pharmacist; and an extended bit in the car with Bateman, Sudeikis and Day. "The Making of the Horrible Bosses Soundtrack" (HD, 6.5-minutes) is a great look at how composer Chris Lennertz pulled together some of the great band musicians together to form a 'super-band' to get the right sound and give the characters a "musical backbone". While there is no trailer to speak of, we do get a third disc featuring the theatrical version of the film on DVD, as well as the ability to get an Ultraviolet Digital Copy, which lets you watch the film on nearly every device/method imaginable.

Funny and crass - and like a R-rated ensemble version of 9 to 5, Horrible Bosses might not break the mold when it comes to edgy comedies, but it certainly is enjoyable to watch. The bosses are deliciously fun and mean spirited, and with a decent presentation on Blu-ray, as well as including two versions of the film and a small handful of supplements, Horrible Bosses is worth checking out.