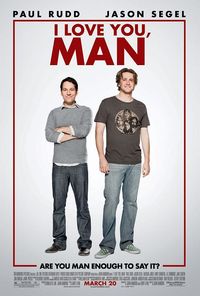 I Love You, Man

Review: I Love You, Man

It seems that comedies are tricky these days. Either you have to do something so outrageous that you risk offending the audience (whereby the laughs come more from shock value than humor), or you debase yourself and go for the cheap joke merely to get a laugh. Films like There\'s Something About Mary made sure that plot was as important as the jokes, which is why for every film like Knocked Up, we get a slew of forgettable comedies like Along Came Polly - and now, I Love You, Man.

Real estate agent Peter Klaven (Paul Rudd) has just become engaged to Zooey (Rashida Jones), but realizes that he has no real guy-friends, and therefore no best man. He then proceeds to make it a mission to find some new friends, in hope of having a new best bud. With the help of his gay personal trainer brother Robbie (Andy Samberg), he goes on a few "man dates", but none of them really pan out. His wife suggests joining her best friend\'s husband Barry (Jon Favreau) at his poker nights - with disastrous results. Finally, Peter meets someone he can connect with when he throws an open house for Lou Ferrigno\'s house, which he\'s trying to sell. Sydney Fife (Jason Segal) is everything Peter wants in a friend. They share the same interests, love Rush, and over the next few weeks, start to hang out more and more - but at the expense of Peter\'s relationship with Zooey. Will his new best-friend ruin his impending marriage?

The biggest problem with I Love You, Man is that much of the humor comes from awkward situations. They\'re not funny per se; they just make you feel really uncomfortable. And while there are certainly a few funny jokes, there are also a few jokes that are pretty bad - and they keep beating the horse until it\'s dead. (I.e., the "slap the bass" joke.) It\'s an overall predictable storyline, and writer/director John Hamburg brings us a film that might amuse, but won\'t have any lasting value.

There\'s a good use of pop songs in the film, as well as a live Rush concert sequence, and Theodore Shapiro\'s 7-minutes of underscore is nice and contemporary. Jon Favreau probably has the best role in the film, with almost all of his scenes being genuinely funny. A few cameos in the film are entertaining as well, particularly J.K. Simmons and Jane Curtin as Peter\'s parents, and Thomas Lennon as Doug, who totally misinterpreted Peter\'s intentions.

March and April always seem to be the dumping grounds for films that might be good, but more than likely aren\'t. I Love You, Man is a comedy that is rather predictable, with forced and uncomfortable situations, and only a smattering of laughs. It won\'t be remembered in two weeks.