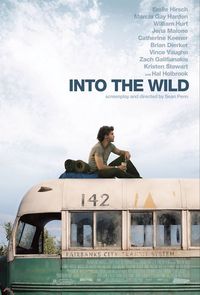 Review: Into the Wild

Based on the novel of the same name, Into the Wild tells the true story of Christopher McCandless (Emile Hirsch) who after graduating college decides to get rid of his life savings, burn the money in his wallet, and travel the country. Adopting the name \"Alexander Supertramp\", his journey takes him all the way to Mexico, and then finally to the Alaskan wilderness. Along the way, he meets an assortment of different characters, all of whom have some profound impact on his philosophy on life, before he finally makes it - alone - to Alaska, where he struggles to survive.

Directed by Sean Penn, the film has a very laid back energy to it. Told in a quasi non-linear narrative, the film starts with Christopher arriving in Alaska, but as his experience in the frigid wilderness progresses, we flashback to the start of his journey, from his graduating college, and so on. There are some interesting segments, such as his journey down the Colorado River, then his illegal entry back into the USA from Mexico, his experience with Mr. Franz (Hal Holbrook), and his first Alaskan moose hunt. The wide-eyed idealism starts to drag after a while, though, and soon it becomes very clear (especially when he reaches Alaska) that Christopher is a misguided youth who thinks that he can learn everything he needs to know about surviving in the wilderness from books and talking to people. His inability to hunt effectively dooms him from the start, and it\'s one thing to accidentally eat the wrong plant and get fatally ill - it\'s another thing altogether when you don\'t bring a map because you figure you can find your way out if you needed to.

The music is composed by Michael Brook with Kaki King and Eddie Veder of Pearl Jam. Veder\'s songs stand out, and the way they work in the film acts as a secondary narrative. It\'s acoustically heavy, and well worth picking up the soundtrack for. The film is very well shot, with the outdoors locations looking both beautiful and daunting. It\'s a never boring, and always interesting film that is more about the human condition than anything else - but in the end, it\'s about a kid who thought he could survive in nature unprepared, and he paid the ultimate price for that arrogance. Is it worth seeing? Yes, definitely. But as hard as the film tries to make you, don\'t feel sorry for Christopher McCandless - feel sorry for his friends and family, and the ones he left behind.