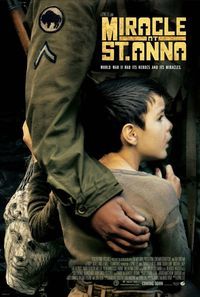 Based on the novel by James McBride, Miracle at St. Anna is Spike Lee\'s directorial take on World War II, as seen through the eyes of a company of Buffalo Soldiers, in Tuscany, Italy in 1944.  Starting in the 1980s, when postal worker Hector Negron (Laz Alonso) shoots an Italian immigrant in seemingly cold blood, a mystery unfolds when police discover a priceless sculpted head from the Ponte Santa Trinita in Florence, which has been missing since it was destroyed by retreating Nazis.  A reporter looking for a scoop (played by Joseph Gordon Levitt) goes to interview Negron, and tries to learn the whole story.  The bulk of the film is told in flashback, dealing with Negron and his three other squad members, when they\'re trapped in the a small Tuscan village after one of them saves a small boy.  Surrounded by the Nazis, the squad befriends a group of locals who have their own ties to the partisans, who have a traitor in their midst - one that the boy might be able to indentify.

The four primary actors that we follow in the storyline are all given pretty much equal screen time, which leaves the viewer wondering (for the first 45 minutes or so) which story they\'re supposed to be watching.  There\'s Negron (Alonso), who tries to be pious when he can, relying on his faith; Cummings (Michael Ealy), who is more interested in the local hottie Renata (Valentina Cervi); Stamps (Derek Luke) who is trying to help the locals prepare for the Nazis, and Train (Omar Benson Miller), a large man who takes the young injured Angelo (Matteo Sciabordi) under his wing.  Once the story picks up and gets moving, it has a great pace that makes you forget the over 2.5-hour running time.

Among many things, Miracle at St. Anna also deals with the issues of racism in the military in World War II, with the \"experiment\" of an all-black infantry division, and Spike Lee doesn\'t hold back in exploring that angle.  A racist captain doesn\'t believe the squad when they say that they\'ve crossed the river - and so he orders artillary fired on a different grid reference, effectively killing his own men. It\'s bloody and presented in a straightforward, unglorified manner.  But while the US side certainly has its own problems, the Nazis are worse, as evidenced by the re-telling of the massacre at St. Anna- which was done to try to flush out the partisans.  Lee doesn\'t restrain himself here, as men, women and children are all killed in cold blood.  It\'s a particularly shocking sequence, one that is likely to disturb the audience - which is the intended effect.

It\'s hard to imagine a modern World War II film that doesn\'t have the same high-shutter, low-saturation look as Saving Private Ryan, and Miracle at St. Anna is no exception.  It\'s well shot, and Lee\'s use of the camera as observer allows for some well staged sequences.  Composer Terence Blanchard\'s score is both mournful and dramatic, with strong brass and piano melodies.  It\'s more evokative of John Barry than John Williams, but it\'s a solid score once the main themes kick in; the massacre sequence and end titles are worth sitting through.

Miracle at St. Anna is not for kids - it\'s a violent, unflinching look at war.  It might take a little bit of time to get going, but once it does, the film becomes an enjoyable mystery and character study.  The epilogue is a minor head scratcher, but overall the film is worth checking out, even if it\'s not likely to be the big Awards Film that it was trying to be.