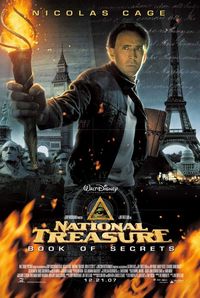 In 2005, National Treasure hit theaters, and gave audiences an enjoyable - if not slightly implausible - romp through our nation\'s history as Ben Gates (Nicholas Cage) and his cohorts went on a treasure hunt looking for the infamous treasure of the Templar Knights. Now they\'re back, and on the hunt for redemption, as new evidence brought forth by Mitch Wilkinson (Ed Harris) shows that Gates\'s great-grandfather might have been the mastermind behind Lincoln\'s assassination. Seeking to clear his family\'s name, Gates and his right-hand man Riley Poole (Justin Bartha), along with his estranged girlfriend Abigail (Diane Kruger) and his father Patrick (Jon Voight) to find the fabled City of Gold, and in doing so, prove that his ancestor was decoding a treasure map, and not plotting the presidential assassination. The hunt will take them to various locations across America (and even to the other side of the Atlantic), and require Ben to commit treason, kidnap the President of the United States, and even worse, involve his mother Emily (Helen Mirren), who hasn\'t spoken with Patrick for decades after a falling out over Patrick\'s treasure hunting proclivities.

Directed by Jon Turtletaub and produced by Jerry Bruckheimer, the film is a entertaining one, never taking itself too seriously, and it provides plenty of thrills and enjoyable action sequences. But there are some nice dramatic moments as well, allowing some character depth, particularly involving the relationships between Ben and Abigail, and Patrick and his ex-wife Emily. The chase scenes are tight and never too convoluted, and the climactic sequence has a nice pacing to it. The accuracy of the historical events portrayed and explored are certainly questionable, but it definitely piques the curiosity, and more than likely, plenty of viewers will pop online to do some research about the actual events.

The music was composed by Trevor Rabin, who scored the first film, and it\'s perfectly fine music, with lots of rhythmic action, and a strong Americana theme which he uses from the first film. The visual effects are pretty good - and when combined with the production design, do a very good job at putting the film in locations that were more than likely difficult to shoot in. (The Buckingham Palace and Library of Congress sequences come to mind.) National Treasure: Book of Secrets is escapist entertainment that will be fun for the whole family, and is likely to spark interest in American history.