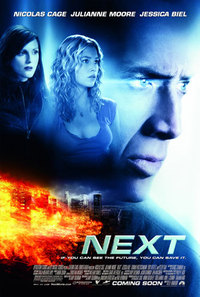 Director Lee Tamahori (best known for his work on Once Were Warriors, Die Another Day) has directed Next, which purports to be based on a Philip K. Dick short story, \"The Golden Man\", although there seems to be very little in common with the two stories. Next is about Cris Johnson (Nicholas Cage), a two-bit Las Vegas magician who is blessed (or cursed) with the ability to see into the future - but he is limited to about two minutes, and can only see things that affect him directly. However he is able to see a vision of Liz (Jessica Biel), and has been trying to find her for days. The FBI is looking for Johnson because Special Agent Callie Ferris (Julianne Moore) is convinced that Johnson can help them prevent a nuclear bomb from going off in LA.

Johnson becomes aware of this, and uses his abilities to evade apprehension - but in the process, attracts the attention of the very same terrorists who are planning on detonating the nuke. (Conveniently, they are a mixed group of Eurotrash.) When he finally encounters Liz, he manages to convince her to take him to Arizona - but somehow, they fall in love on the short ride. Perhaps it\'s because Johnson knows exactly what to say for the intended result, but it\'s one hell of a fast courtship either way you cut it. The action starts to heat up as the FBI and the terrorists converge on Johnson and Liz, and soon he finds himself in a situation where he needs to cooperate with the FBI to save her. But is it too late to save the city?

There are a few action sequences that are fun to watch, such as the casino chase at the beginning and the Cliffhanger Hotel segment - but overall, I wasn\'t too enthralled with the film. The acting wasn\'t doing anything for me, Nicholas Cage looked like he stole Tom Hanks\' hair from The Da Vinci Code, and I found the romance to be completely unbelievable. But what really annoyed me was the ending - it was a complete cop out, and pretty much negated the whole last half of the film.

The music by Mark Isham is fine, it serves the film appropriately, and he has a few nice thematic motifs that come back and play a few times, but it\'s nothing to rush out and get on CD. You know there\'s a problem when your movie poster is more exciting than your movie, but that\'s exactly what happens here. Skip Next - you\'ll be glad you saw into the future and avoided it.