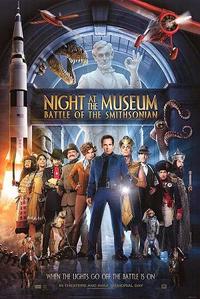 Night at the Museum: Battle of the Smithsonian

Review: Night at the Museum: Batttle of the Smithsonian (Blu-ray)

2006's Night at the Museum was an entertaining fantasy film involving night watchman Larry Daley (Ben Stiller) and his encounters with exhibits at the Natural Museum of History that come to life, courtesy of  a magical Egyptian tablet.  In the sequel, Night at the Museum: Battle of the Smithsonian, Larry is a successful inventor of popular infomercial products, and only occasionally goes back to the museum to visit his friends.  After a hiatus of a few months since his last visit, he goes back only to find that due to new renovations, most of the exhibits are being packed up and sent to Washington, D.C. to go into storage at the Federal archives beneath the Smithsonian - but the magical tablet will be remaining (meaning that most of his exhibit buddies will be permanently at rest).  But when the capuchin chimp Dexter sneaks the tablet along for the ride, all of the Smithsonian exhibits are woken up - including the evil Pharaoh Kahmunrah (Hank Azaria), who wants to use the power of the tablet to open a portal to the underworld, unleashing the armies of the dead upon the earth.  Naturally, Larry has to stop him along with the help of his friends, as well as new Smithsonian exhibits come-to-life, including Amelia Earhart (Amy Adams) and the giant statue of Abraham Lincoln from the Lincoln Memorial.  Kahmunrah meanwhile has enlisted some of history's biggest villains, including Ivan the Terrible (Christopher Guest), Al Capone (Jon Bernthal), and Napoleon (Alain Chabat).

Azaria is quite amusing with his take on an Egyptian Pharaoh having a lispy Boris Karloff dialect, and Adams is charming as always, but the Night at the Museum: Battle of the Smithsonian doesn't really go anywhere plot-wise, and doesn't have much in the way of character development.  Stiller has a few moments of comedic wit, but seems to just rehash his same aloof character from the first film.  A few of the small roles, including Jonah Hill as a Smithsonian security guard and Bill Hader as General Custer, stand out more than the leads.  Mainly filled with various gags and a few entertaining set pieces, the movie jumps around a surrealistically empty Washington D.C., primarily focused in the National Gallery and the Air and Space Museum.  In the end, it's entertaining, but empty.

Released as a special Blu-ray triple pack (including DVD and Digital Copy), Night at the Museum: Battle of the Smithsonian sports a very good visual presentation.  The film, presented in its 2.35:1 theatrical aspect ratio, is crisp, clean and contains excellent color reproduction and black levels are solid. Detail is exceptional, and the set pieces look great.  Audio, in the form of a DTS-HD Master Audio 5.1 English  track, is primarily front-heavy for the first half of the film, only really using the surrounds when the action starts to ramp up.  Bass is surprisingly muted, and moments that screamed for the subwoofer to punch sadly failed.  Alan Silvestri's rousing score does come through nicely, though, and dialogue is clearly rendered.

Supplements on the film are pretty substantial.  We first start out with two commentary tracks, but neither are really as exciting as one would hope.  Director Shawn Levy provides a track that starts out high-energy, but quickly tapers off into long periods of silence. The second track, with the two screenwriters Thomas Lennon and Robert Ben Garant, is a bit more informative, but meanders into a lot of random asides.  Between the two tracks, we get a little bit of information about the production, and some behind-the-scenes stories, but there is more substance in the rest of the extras - notably "The Curators of Comedy: Behind-the-Scenes of Night at the Museum 2" (HD, 28-minutes), a pretty solid look at the cast and set-pieces of the larger-than-life sequel.  "Historical Confessions: Famous Last Words" (HD, 6.5-minutes) is a mildly amusing bit where cast members improvise a bit about their characters' legacies.  "Directing 101: A Day in the Life of Director/Producer Shawn Levy" (HD, 19.5-minutes) takes us through a "typical day" with the director as he works with actors Owen Wilson and Steve Coogan to film one of the action sequences in the film. It's a pretty good look at the daily production cycle.

"Caveman Conversations: Survival of the Wittiest" (HD, 4.5-minutes) is a rather useless extra, as three of the cavemen from the film are interviewed and grunt out answers. "Museum Magic: Entering the World of the Photograph" (HD, 5.5-minutes) is a quick behind-the-scenes look at a visual effects segment where they had to recreate 1940s Times Square in Vancouver.  "Secret Doors and Scientists: Behind-the-Scenes of The American Museum of Natural History" (HD, 16-minutes) is a really interesting featurette looking at the real museum, with some of the curators and scientists showcasing their preservation efforts.  "Phinding Pharaoh" (HD, 5-minutes) looks at Hank Azaria's development of his villainous character, and how he eventually came to the lisping Boris Karloff version.  Three "Show me the Monkey" featurettes ("Monkey Business", "Primate Prima Donnas" and "A Day in the Life of Crystal and Squirt") (HD, 18-minutes) take a surprisingly interesting and detailed look at Crystal and Squirt, the two monkeys who are featured in the film and are amazingly talented. (Dare I suggest even more so than some other actors!)

"The Jonas Brothers in Cherub Bootcamp" (HD, 4-minutes) is a quick satirical look at the teen boyband sensation prepping for their audio cameo in the film as the flying cherubs. "Gangster Levy" (HD, 2-minutes) is a quick peek at a moment where the director and his AD dressed up as 1930s gangsters for some on-set video footage that needed to be on a television screen in the museum. Eleven "Deleted Scenes" (HD, 27-minutes) are presented with optional commentary by Levy, and include an alternate ending. A "Gag Reel" (HD, 8-minutes) runs a bit long, and has some real groaners as well as some nice gems.  Finally, two "Fox Movie Channel" bits, "Making a Scene" (SD, 9.5-minutes) and "World Premiere" (SD, 5.5-minutes) are included, looking at filming in the actual Air and Space Museum and the film's premiere, respectively.  There is another extra on the Blu-ray disc, were you can play the "Museum Scavenger Hunt Game" as you watch the film. Using the colored buttons on your Blu-ray remote control, you can play two different difficulty levels to identify people and objects on screen.  Neato!

Night at the Museum: Battle of the Smithsonian is an entertaining but somewhat hollow film.  It will keep the kids amused, and fans of the first film will find much to enjoy about it, but it's probably worth a rental to check out the nice array of extras.