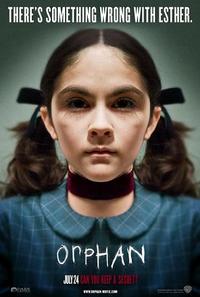 The idea of a child that is inherently evil is not new.  In the 20th century, it was probably best popularized with the 1954 William March novel, The Bad Seed, immortalized on film two years later in the movie of the same name. Since then, there have been dozens of films, notably Children of the Damned, and The Omen, focusing on evil children, but the scariest concepts come from those without a supernatural element, like The Good Son, where the child is so twisted psychologically that it is truly unnerving.  In that vein, this year we were given Orphan, which purported to be a "new take" on the "evil child" concept.

Kate (Vera Farmiga) and John (Peter Sarsgaard) are a couple who have two children - Danny (Jimmy Bennett) and the deaf Max (Aryana Engineer).  But Kate has been deeply troubled since the loss of her third child who was stillborn, and she lost her job due to a drinking problem. She's sober now, but suffers from nightmares and there's been some strain on her marriage.  Esther (Isabel Fuhrman) is a Russian orphan living in an orphanage run by Sister Abigail (CCH Pounder) when she is adopted by Kate and John, and she's immediately accepted into the family by Max, but Danny has reservations.  Soon "accidents" start to occur, and Esther is "coincidentally" nearby.  Max is keeping quiet about it, but Kate slowly starts to suspect that not everything is what it seems. As she starts to do her research on Esther's background, things really start to heat up.

Orphan runs a little long, at just over two hours, considering that for at least half of the film, you can readily predict that will come next.  Most of the tension comes through Jeff Cutter's cinematography and John Ottman's music, but the real star of the show is Fuhrman and her rather creepy performance.  The climax of the film contains a twist (of course), and it wasn't quite what I had expected - so to that end, the film works.  But it falls into many of the traps of conventional modern horror films, and by the time it's over, you'll likely just be ready to move on to the next film.

Released on Blu-ray, Orphan sports a solid visual transfer.  There are a lot of sequences that take place at night, and black-levels are detailed enough for subtle features to be clearly displayed. The color palette is slightly desaturated, as a stylistic choice, and everything is finely presented with a natural hint of film grain.  Overall, an excellent transfer.  Similarly, audio is presented in English Dolby TrueHD 5.1, and French and Spanish Dolby Digital 5.1.  Dialogue is rendered clearly, and the soundscape is immersive, allowing for plenty of aural tension to be created.

Supplements are a bit sparse. While a commentary track would have been welcome, instead we just get a short featurette, "Mama's Little Devils: Bad Seeds and Evil Kids" (HD, 15-minutes) which serves as a mini-behind-the-scenes look at the making of Orphan as well as a quick look back at some of film's classic "kids gone wrong".  The only other extra is a very short collection of "Deleted Scenes and Alternate Ending" (SD, 4-minutes), none of which are really striking.  A digital copy is also included on a bonus DVD.

Orphan is one of those films that you can enjoy, if you don't mind the predictability.  With a solid visual and audio presentation, it will be an enjoyable showing, but ultimately the film ends up being yet another in a long line of quickly forgettable modern horror films.  Rent it, then forget it.