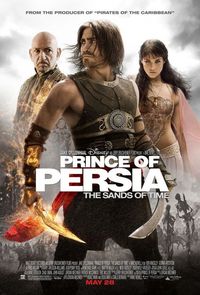 Prince of Persia: The Sands of Time

Review: Prince of Persia: The Sands of Time (Blu-ray)

It's increasingly rare that films in Hollywood come from truly original sources. Witness the never-ending surge of sequel, remakes, spin-offs, re-imaginings, adaptations, etc.  But just because something is an adaptation of a successful property, it doesn't necessarily mean that it will capture the audience that it tries to caters to.  (See Phantom of the Opera, for instance.)  In the case of Prince of Persia: The Sands of Time, the source material was not only the video game of the same name, but the entire saga created by visionary video game designer Jordan Mechner.  That Mechner himself was involved in crafting the storyline, as well as super-blockbuster producer Jerry Bruckheimer and director Mike Newell, the film had all the right elements - but was the film worth the sum of its parts?

The storyline involves Dastan (Jake Gyllenhaal), an orphan who was adopted by the King of Persia.  King Sharaman (Ronald Pickup) has been expanding his empire, and his brother Nizam (Ben Kinglsey) arranges with Sharaman's two sons Tus (Richard Coyle) and Garsiv (Toby Kebbell), to lead a surprise attack on the holy city on Alamut, who they believe is selling weapons to the King's enemies. Dastan uses his cunning and stealth to make the attack a success, and then in an effort to foster peace, Sharaman suggests that Dastan marry Princess Tamina (Gemma Arterton).  But when Sharaman is killed and Dastan is framed for the murder, he finds himself on the run with Tamina.  Soon it becomes clear that the dagger that Dastan grabbed when capturing Tamina has a larger purpose - it is the Dagger of Time, a mystical artifact that allows the bearer to rewind time 1-minute when activating the Sands of Time held within.  But the sand runs out, and now Dastan and Tamina must return to Alamut to clear his name and expose the conspiracy that resulted in his adopted father's death.  Along the way, they encounter Sheik Amar (Alfred Molina), a somewhat shady character who runs an illegal ostrich racing enterprise, deadly Hassansin warriors who are trying to kill them, and other deadly situations.

It's not a very convoluted storyline, but the way that it unfolds might seem a little muddled.  For a video game adaptation, it could certainly be worse, but it could also be better.  It plays out as a somewhat predictable by-the-numbers popcorn film.  It's a fun film, but hardly something deep and meaningful.  Molina and Arterton are the two shining jewels in the film; Molina is great in his comic timing, and Arterton gives a nice performance of a strong independent woman who can hold her own.  While Mike Newell directed the film, and he cut his teeth on action sequences during Harry Potter and the Goblet of Fire, the film is definitely a Jerry Bruckheimer production, through-and-through.  The action sequences are where the film shines, using the free-running styles of parkour to give them a bit of a twist and high energy.  The music by Harry Gregson-Williams does an excellent job evoking the mystical Persian qualities, with a strong melody and fun ethnic percussive grooves.  The production design is excellent, and the visual effects sequences range from excellent to somewhat cheesy (particularly during the sand avalanche sequence).

Released on Blu-ray as a stand-alone release, or a triple-combo pack (Blu-ray / DVD / Digital Copy), Prince of Persia: The Sands of Time sports an excellent transfer that cleanly recreates the theatrical presentation.  One of the (blessedly) few summer films that didn't seem to undergo a 3D conversion process, the film has a golden hue to the color timing that comes across the screen quite nicely.  The details are all cleanly visible, from the grains of sand, to the intricate costume design, to the pores in the actor's skin.   Light film grain is also visible, and even the visual effects sequences (well, the ones that were top notch) look so great that you'll want to pause the Blu-ray and do a frame-by-frame exploration.

Audio is where this release truly shines.  I hope you have those rear speakers primed, because this film gives them quite a workout!  The DTS-HD Master Audio 5.1 English audio track is so immersive and engaging that you will probably be pulling out this disc to show off your friends. Dialogue is clearly emitted from the center channel, and the sound effects and score fully swirl around you for nearly the majority of the 116-minute long feature.  The thundering moments will push the limits of your subwoofer, and Prince of Persia: The Sands of Time is definitely one of those demo-worthy releases.  Additional audio tracks include French and Spanish Dolby Digital 5.1, as well as an English Descriptive Audio track.

On the Blu-ray, there are only two extras. The first one, called "The Sands of Time" (HD, 79-min) is an interactive viewing mode that runs the length of the film.  As the movie plays, at certain points the Dagger of Time will appear, giving you a short time-span during which you can press the "Enter" button on your remote to access a video segment, known as a "Rewind", that takes you back a bit and explains some behind-the-scenes of an aspect of the film which you just saw. Some "Rewind" segments have additional pieces that can be watched when you activate the dagger once again.  It works relatively seamlessly, and the video bits can also be accessed through a main index.  Unfortunately there is no "Play All" option.  There are twenty "Rewinds", with 42 video segments in all.  They range in all manner of topics from the challenges of filming in Morocco, to the costume, set and production design, casting and characters, visual effects, action choreography, story, and more.  Unfortunately there is nothing about the music, and there is no commentary track.

The second and last extra is a short "Deleted Scene - The Banquet: Garsiv Presents Heads" (HD, 2-min) which would have been near the beginning of the film, in which Garsiv presents the King with treasure from his recent conquests, as well as the heads of the Lords he conquered. This shows just a little more of the ruthlessness of his character.

On the DVD, we have "The Unseen World: Making Prince of Persia" (SD, 16-min).  This short but informative behind-the-scenes look at the making of the film touches on a spattering of the same topics as the Blu-ray’s "focus points", but is laid out in a condensed linear narrative, with some slightly different footage than the Blu-ray vignettes.  It’s nice to have both versions of the supplement available, but it would have been nicer to include it on the Blu-ray disc, as well, so you don’t have to pop the DVD in.

Prince of Persia: The Sands of Time might not be the franchise-starter that the filmmakers hoped it would be, but it was a fun popcorn film that provided plenty of entertainment value.  Is it worth picking up on Blu-ray? Well, the transfer is top-notch, and the supplements, while seemingly anemic actually do pack on nearly 80-minutes of behind-the-scenes vignettes.  The lack of a commentary (and trailers!) is disappointing, so those hoping for more bang-for-their-buck might hold back, but otherwise, it's absolutely worth the rental.