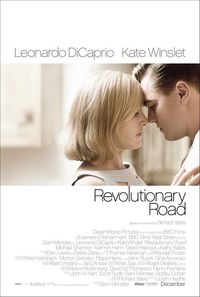 Based on the period novel by Richard Yates, the new Sam Mendes film Revolutionary Road concerns the plight of unhappy 1950\'s suburbanites Frank Wheeler (Leonardo DiCaprio) and his wife April (Kate Winslet), and their desire to escape from the trap of their existence.  After an attempt at acting fails, April feels that her mundane life in suburbia has no more to offer her, and convinces Frank - who is similarly bored with his job, and even has a meaningless affair with a secretary - that they and their two children should move to Paris.  With a renewed sense of purpose Frank and April start to make their plans, as different aspects of their lives begin to diverge - arguments get more frequent, the relationships with their friends are starting to be strained and get complicated, and soon something happens that will throw their plans off track, and push their relationship to the breaking point.

Revolutionary Road was a critically acclaimed novel when it was released back in 1961, and its themes of suburban unhappiness and conflict was a major contrast compared to the typically cheery vision portrayed in pop culture at the time.  Unfortunately, in 2008, the idea of \"stripping away the positive veneer to reveal the seedy underbelly of suburbia\" has a tired, \"been-there, done-that\" weariness to it.  Mendes pushes the actors to the extremes, resulting in a sense of overacting at times.  Adapted by screenwriter Justin Haythe, the dialogue feels like it was a series of drama club exercises strung together with a weak narrative.  Every five minutes, like clockwork, we\'ll be presented a forceful argument.  Taken individually, it might be interesting, but strung out over nearly two hours, it starts to get boring and repetitive.   The controversial issues of adultery and abortion are explored only tangentially, but presented in a way to give the implication that they were more meaningful than they ended up being.

Katy Bates has an overly Stepford Wife-ish role as the real estate agent who found the house for the Wheelers, and Michael Shannon is amusing as her over-the-top mentally unstable son who speaks bluntly about what he observes in the Wheelers.  Shot by Roger Deakins, the film has an excellent visual style - very simple and understated, but natural and with great detail in the shadows; he\'s a master of his craft.  Conversely, Thomas Newman\'s musical score felt phoned in - it\'s the same piano/strings melange style that he\'s known for, but it doesn\'t seem to have any real weight behind it.  (He\'ll get the Oscar nomination for Wall-E; just wait and see!)

Some might find the novelty of Kate Winslet, Leonardo DiCaprio and Kathy Bates reunited together again ten years after Titanic to be worth the trip to the theaters, but honestly it\'s not as compelling as you would think.  The story doesn\'t feel fresh (even though it might have been, 45-years ago), the scenes all feel overdone, the acting feels forced and too grandiose, and the pace feels languid and uninvolved.  If you come up on Revolutionary Road, keep driving by.