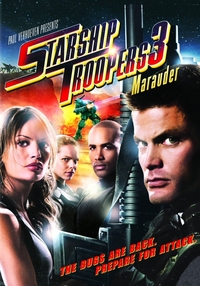 You might be asking yourself, why would I start a review of the Starship Troopers Trilogy with the last and most recent entry in the franchise?  The reason is thus: I figured it would be better to go from worst to best, and get the bad stuff over with as quickly as possible.  For the uninitiated, Starship Troopers was a 1997 film by Paul Verhoeven that was loosely based on the classic Robert Heinlein novel about a futuristic war between humans and "bugs".  There are lots of fascist overtones in the film, which was done as a tongue-in-cheek propaganda film.  If you didn\'t "get" that part of the joke, then you were probably offended by the over-the-top violence and overly patriotic cheese dripping all over the film.  Anyways, the hero of the first film was Johnny Rico (Casper Van Dien), and now eleven years later, he\'s back in Starship Troopers 3: Maurader, playing a Colonel in the "Second" Bug War.  When a mission goes bad, Rico is set to be executed for subordination - but he\'s given a reprieve to help launch a top-secret mission to rescue the Sky Marshal (Stephen Hogan) and his crew (which happens to include Rico\'s ex-lover), and in the process expose a plot that could bring about the downfall of the Federation.

Directed by screenwriter Ed Neumeier (Robocop, Starship Troopers), Starship Troopers 3: Marauder tries to recapture the satirical tone of the first film, which they pretty much abandoned in the second film, but unfortunately here it doesn\'t quite work.  Instead, it feels hammy and just not funny or clever.  There are some interesting ideas presented in the film (and apparently some ideas that tie directly into the original novel), but the best way to watch (and try to enjoy) this film is when you really don\'t have anything better to do, and even then, you would be better off if you were drunk or something.  It\'s really just hard to take the dialogue and acting seriously, since there\'s not that much about it that compels you to appreciate the craft.  The visual effects range from pretty good to crappy, and I have to admire the filmmaker\'s attempts to do a lot of in-camera work when possible, but the limited budget clearly strained their abilities.  Oh well.

Released on Blu-ray disc, Starship Troopers 3: Marauder boasts a very good transfer, with a bit of film grain present.  It\'s such a good transfer that you can see all the limits that the budget imposed on the set design and visual effects.  Not a good thing.  But that\'s not to diminish the quality of the transfer, and so if you\'re going to expose yourself to the film, at least you know you\'re getting the best presentation possible.  The audio isn\'t so lucky. While it\'s an immersive Dolby TrueHD 5.1 tracks, that\'s not saying much when it sounds like a lot of the production audio was recorded in a tin can.  Dialogue is hard to hear at times, and it\'s lacking fidelity. The music score by Klaus Badelt seems mixed pretty low at times as well, and overall the audio doesn\'t have the punch that you would hope to get from the film.

Sony Pictures Home Entertainment has slapped a lot of extras on the Blu-ray release of Starship Troopers 3: Marauder, starting with two commentary tracks.  The first one features director/writer Ed Neumeier, visual effects supervisor Robert Skotak, and producer David Lancaster.  It\'s a trope track, that covers the process of shooting the film, making the visual effects, and other technical things. The second track features Neumeier again, but this time joined by actors Casper Van Dien and Jolene Blalock.  The wide-eyed enthusiasm about making the film might come across as hollow, but the actors seem to be genuinely happy with the result. At least, it sounds like they had a nice experience making the film, even if we don\'t have as good a time watching the film.

A nifty feature called "Marauder Mode" lets you watch the film with pop-up video commentary nuggets including interviews, behind-the-scenes footage, and trivia information.  It\'s pretty nice, but the audio for the pop-up videos is PCM encoded, making my receiver switch modes every time it would pop up; kinda annoying.  Otherwise, lots of details here for those interested in the filmmaking process, as well as adaptation issues from the novel.

A gimmicky "Put Yourself in the Film: Join the Fight!" lets you upload a picture of your face, and you\'ll appear (sans emotion) in a few scenes as you watch the movie. It\'s pretty hokey, but is good for a laugh.  There are also two featurettes: "Evolution: The Bugs of \'Starship Troopers 3: Marauder\'" runs about 11 1/2-minutes long, and talks about the new bugs that were designed and created for the film.  Creature design enthusiasts will enjoy this one.  The second featurette is the nearly 14-minute long "Marauder\'s Mobile Infantry", which explores the casting and characters in the film.  Finally, the horrible end-title song "It\'s a Good Day to Die" gets a music video.

Starship Troopers 3: Marauder is not the type of film I can really recommend.  I appreciated a few of the technical aspects of the filmmaking process, but there are better films out there to look at if you want to check out creature design and action moviemaking.  With a crappy storyline and cringe-worthy acting, this movie is best seen drunk.