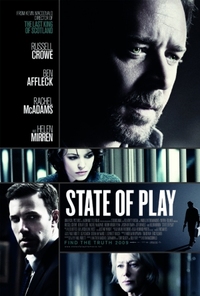 Based on the rather successful six-part BBC series, State of Play is a gripping political thriller that mixes the intrigue of a murder investigation and political corruption, with a secondary story about the hybridization of new media and old-school journalism. Washington Globe veteran investigative reporter Cal McAffrey (Russell Crowe) is writing an article about the a murder of a woman, who it turns out was a research aide to his friend, congressman Stephen Collins (Ben Affleck). Collins has been holding hearings about a military contractor, and when McAffrey teams up with a junior reporter blogger, Della Frye (Rachel McAdams), the layers of the story start to peel back, revealing a larger conspiracy where not everything is what it seems.

Directed by The Last King of Scotland\'s Kevin Macdonald, the film is well paced, engaging, and contains large swaths of well written dialogue (among the writers on the film were Billy Ray, who wrote/directed the excellent thriller Breach, and Tony Gilroy, who wrote/directed Michael Clayton). An overweight slob with greasy shoulder-length hair, McCaffrey is a character that is smarmy and yet seasoned and instantly likable. The banter between him and Frye is entertaining to watch, like a salty old dog and a new excitable puppy nipping at each other\'s heels.

The editing is compelling, and the score by Alex Heffes is subdued yet adds nicely to the tension - and avoids underscoring dialogue. Toss in some rather strong supporting roles - like Helen Mirren as the newspaper publisher, Jason Bateman as a corrupt club promoter and Jeff Daniels as another questionable congressman - and you have the makings of a solid film that is definitely worth checking out.