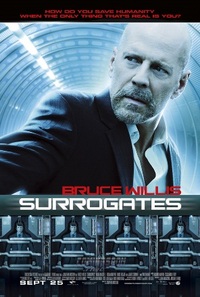 There seems to be an emerging story idea in Hollywood - that of the "avatar". While not a new premise, it undoubtedly has been gaining speed since James Cameron's new film, Avatar, was announced. Jonathan Mostow's Surrogates, based on the graphic novel of the same name, takes place in a world where humans use robotic avatars, known as "surrogates", which are much better-looking versions of their operators. These robots are unable to transmit pain to their operator if harmed, letting people live out their fantasies risk-free.

But there is a counter-movement to the surrogates, led by The Prophet (Ving Rhames), who preaches against the use of surrogates and insists on a natural human connection. When an operator is mysteriously killed when his surrogate is attacked, FBI agent Tom Greer (Bruce Willis) investigates what turns out to be the first murder in years - where the victim happens to be the son of the inventor of surrogates, Dr. Lionel Canter (James Cromwell). Working through the clues, Greer and his partner discover a larger conspiracy that puts all of the surrogate users on the planet at deadly risk. And when Greer loses his surrogate, he must venture out into the world in his natural state to try to solve the mystery and stop the conspirators from enacting their deadly plan.

Since we live in a world where everyone is tethered to their cellphones and Blackberries, it's easy to see how the world of Surrogates is the next logical progression to the disconnect that we all experience with our fellow humans. The premise is solid, and many aspects of the film are interesting, especially the strained relationship between Greer and his wife (Rosamund Pike), but Surrogates suffers from a bit of forced dialogue, predictable situations and ultimately works as a heightened and much slicker B-movie than it would as a big-budget sci-fi action flick.

The visual effects are pretty good, and Mostow's direction keeps the tension and pacing moving along, and Richard Marvin's orchestral score is delightfully tense and Goldsmith-esque. But at a short 88-minutes, Surrogates is a concept that didn't quite execute as planned. There were too many bugs in the release version, and unlike an operating system, there are no service packs available.