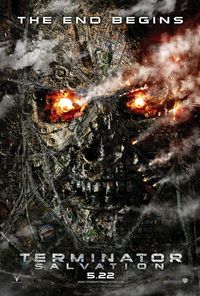 You certainly can\'t blame them for trying. It\'s no secret that James Cameron\'s Terminator franchise was exceptionally successful, but we can also be honest about how disappointing Terminator 3: Rise of the Machines was. After the success of Casino Royale and The Dark Knight, it\'s not surprising that the powers-that-be would seek to renew the Terminator franchise.

Directed by McG, Terminator Salvation attempts to build on much of what James Cameron established, but with a few twists, as well as some winks-and-nods to the previous films. Starting out with a prologue where criminal Marcus (Sam Worthington) given the chance to donate his body to science before being executed, the film quickly moves forward to 2018, well past Judgment Day, to the Future War where John Connor (Christian Bale) is not quite the prophesied leader of the resistance against Skynet and the machines. He broadcasts uplifting and rousing speeches on pirate radio stations, giving hope to the remnants of mankind, while the resistance commanders - led by General Ashdown (Michael Ironside) work from a secret submarine to bring about the end of Skynet.

After a signal is discovered that might allow the resistance to shut down Skynet long enough to launch a lethal attack (and prevent the new T-800 models from coming online), Marcus appears on the scene, confused and unsure of his surroundings. He connects up with a young Kyle Reese (Anton Yelchin) who has been targeted by Skynet for termination since he is the eventual father of John Connor (see Terminator). But when Reese is captured by Skynet (who is collecting humans to do experiments on them), and Marcus - who is not all he appears to be - is captured by Connor, the decision to launch an attack on Skynet might result in Reese\'s death - and Connor\'s existence being obliterated - unless he can get into Skynet and rescue Reese.

The problem with Terminator Salvation is that once you strip away how good it looks and sounds, there\'s really not much there. The action - while interesting - plays out like an over-hyped video game. The story is simple and a bit messy, with plot-holes riddling the narrative. The characters are flat and uninteresting, with no back-story really presented to us to allow us to feel anything to them. Since the Future War has been going on, the John Connor in this film is already quite a different character than we\'ve seen before, so we\'re missing a chunk of his personality and can\'t really feel anything for him. It\'s like jumping into The Two Towers before seeing The Fellowship of the Ring. And as good an actor as he is, Bale\'s role really feels shallow and preachy, without any real purpose.

There are some supporting roles that feel like they were cut down, resulting in performances that feel half-delivered. Connor\'s pregnant wife Kate (Bryce Dallas Howard), fighter pilot Blair Williams (Moon Bloodgood) and Ashdown are all pretty good, but feel wasted here. Especially Oscar-winning actress Jane Alexander, who has no purpose being in the film at all.

The look and feel of the film has a really nice desaturated, silvery sheen everything, and there are some cameos from the original films, which I won\'t discuss here, but will just say that the visual effects are quite good - kudos to ILM for their work on this one. The music by Danny Elfman is serviceable but doesn\'t feel too inspired, and I can\'t blame him given the material he had to work with. Even the three uses of Brad Fiedel\'s Terminator theme feels cut-and-pasted into the film.

Suffering from script and plot issues, as well as some major character flaws, Terminator Salvation is a flashy and at times entertaining film that should have been much better than it ended up being. It might have been planned to be the first chapter in a Future War trilogy, but it plays like the second - and given how it has been received, might be the last.