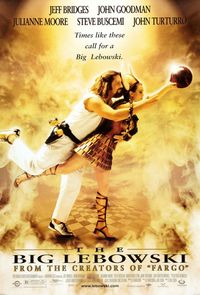 It took a few years for the Coen Brothers' The Big Lebowski to earn the reputation it has as a cult comedy classic, with an enormous cadre of loyal fans, and even a few festivals inspired by the film.  What makes every Coen Brothers film stand out is their sense of complete disregard for the 'studio system', an eschewing of the formulaic while giving us something unique and fresh to observe. Sometimes this works exceptionally well, like with Fargo, O Brother Where Art Thou?, and True Grit, but other times it doesn't quite work the way they had hoped, not finding an audience (like with The Hudsucker Proxy and The Ladykillers).  The Big Lebowski might have ended up in the latter category - in fact, it seemed destined for it - until the slow pace of word-of-mouth turned it into a phenomenon that is a blast to watch, especially with groups of friends.

The Big Lebowski does not refer to the main character, Jeffrey "The Dude" Lebowski (Jeff Bridges), but rather to the millionaire Jeffrey Lebowski (David Huddleston).  It's a simple case of mistaken identity that thrusts The Dude - a pot-smoking, unemployed slacker - into a world of kidnapping, high-art, nihilist gangs, and the porn industry.  Apparently Bunny Lebowski (Tara Reed), the millionaire Lebowski's young trophy wife, owes a lot of money around town - and when two thugs come to extort Lebowski for money, they end up at The Dude's bungalow - and piss on his rug.  Realizing the mistake, The Dude goes to the Big Lebowski to get his rug back, is rebuked, but takes a rug anyways. We soon find out that The Dude is in a bowling league with his friend Walter (John Goodman), a paranoid Vietnam veteran, and Donny (Steve Buscemi), who is not the brightest person.  When The Dude learns that Bunny has been kidnapped, the Big Lebowski entrusts him to deliver the money in exchange for her freedom - but Walter has other plans, figuring they could keep the money themselves.  This sets off a slew of adventures that introduces The Dude to Lebowski's daughter (Julianne Moore), a sexually expressive artist, who gives him a counter offer since she's convinced that Bunny is behind her own kidnapping scheme.  But in the end, all The Dude wants is his rug back, because it really tied the room together.

The Big Lebowski comes to Blu-ray in an HD transfer that unfortunately doesn't quite hit the high marks.  It's not that the transfer itself is bad, it's just that there was a bit of unnecessary DNR applied to remove most of the grain….. and the film was a big grainy to begin with. So, some fine detail gets lost, and it has a slightly "waxy" feeling.  But for the most part, it's not noticeable, and Roger Deakins' cinematography is allowed to breathe, with a nice level of brightness and color saturation.  It's not a transfer that will blow you away, but considering the only DVD I had of the film was the old 2000 DVD transfer, this is a significant improvement.

Also highly improved is the audio, presented in DTS-HD Master Audio English 5.1, as well as DTS French 5.1 and DTS English 2.0.  The dialogue is clear and typically front-heavy, and sound effects are minimal but used effectively in key scenes, taking advantage of the rears.  The music is what truly shines, though, and music supervisor T-Bone Pickens' choices gave The Big Lebowski a great soundtrack.

Released as a 10th Anniversary on DVD in 2008, The Big Lebowski makes its Blu-ray debut carrying over most of those extra features, some upgraded to HD. Starting out with an "Exclusive Introduction" (SD, 4.5-minutes), this fake intro from "Mortimer Young of Forever Young Films" (who is also seen on the intro to the 2001 Blood Simple DVD) talks of the high importance of the film - giving us a sense of how the Coen Brothers don't take themselves too seriously, and neither should you.

"The Dude's Life" (HD, 10-minutes) is a nice retrospective on the film with Jeff Bridges, John Goodman, Julianne Moore, John Turturro and Steve Buscemi, supplemented with archival interviews and footage. "The Dude Abides: The Big Lebowski Ten Years Later" (HD, 10.5-minutes) continues the trip down memory lane, with more of a focus on the cultural impact and cult following that the film has achieved over the past decade.  This tails nicely into "The Lebowski Fest: An Achiever's Story" (SD, 14-minutes), a rather nice look at the group of guys who actually managed to successfully get a festival off the ground for Lebowski fans.

"Flying Carpets and Bowling Pin Dreams: The Dream Sequences of The Dude" (HD, 4.5-minutes) is a brief but informative look at the making of the surreal dream sequences within the film.  Jeff Bridges is a rather talented photographer, and took a lot of candid photos during the film shoot. These are looked at in the "Jeff Bridges Photo Book" featurette (HD, 17.5-minutes).  It's pretty interesting, and there are some great anecdotal stories that Bridges shares.  An "Interactive Map shows you where some of the notable sequences were filmed in Los Angeles (sadly no "Play All" feature here), and "Photo Gallery" is just an SD look at the Bridges photos.  Finally the archival featurette, "The Making of The Big Lebowski" (SD, 24.5-minutes) doesn't have the distance of time to give it some perspective, but it's great to see a true behind-the-scenes piece that shows the rather reclusive Coen Brothers in action, as well as talking quite candidly about their processes.

The Blu-ray comes with a few exclusive extras as well, most notably the Universal "U-Control" features. "Scene Companion" gives us some nice picture-in-picture extras, with behind-the-scenes material, interviews, trivia, and more.  "Mark It Dude" is a little counter that keeps track of the number of times someone drops an "F-bomb", "Dude" and other "Lebowski-isms" throughout the film. "The Music of The Big Lebowski" identifies the songs in the film, and lets you build a custom playlist.  There's one little game, "Worthy Adversaries: What's My Line Trivia", which lets you test your knowledge of the film by completing dialogue.  Missing is the theatrical trailer - too bad.  The Limited Edition comes in a nice DigiBook case, with a 24-page full color book of quotes, trivia, anecdotes and photos from the film.

The Big Lebowski is definitely one of the Coen Brothers' best films, and like a fine wine, it only gets better with age.  The humor is unique; the story borders on the absurd while staying realistic, and the performances and characters are great. Released on Blu-ray, we get all the extras that have come previously as well as some new ones, and while the visual transfer isn't the best it could have been, it's still better than any DVD before it.  If you're a fan of the Coen Brothers, then this is an absolute must-own release.