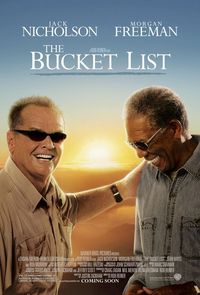 Rob Reiner\'s latest drama, The Bucket List, focuses on the end of the lives of two different men: mechanic Carter Chambers (Morgan Freeman) and corporate billionaire Edward Cole (Jack Nicholson). When both men are stricken with cancer, they end up sharing the same hospital room. When it turns out they both are terminal, they decide to spend the remaining time they have doing all the things they have ever wanted to do in life, but had no opportunity to do so. Cole, who is divorced multiple times over and single, has no problem funding the trip, but Chambers has a wife, who is not thrilled about the idea - and keeps insisting that he come home to spend the remaining time he has with her and their family.

Ultimately The Bucket List is a story about friendship, about two men who find solidarity through their disease and are able to enrich each others lives, even though they have very little in common. Freeman and Nicholson are great actors, but this film lets them play characters that have almost zero nuance. Everything is out in the open, the character arcs are completely predictable, and at the end, you know exactly what will happen. Freeman even provides expository voiceover, since that\'s something he\'s probably contractually obligated to do in most of his films. (Granted, with his voice, I can\'t blame him!) Marc Shaiman\'s touching score serves the story well, and is never overbearing during even the most schmaltzy moments.

Reiner is a competent filmmaker, and the film is certainly well made. The only major technical flaw to the film is the over-reliance on visual effects, which was distracting for me. When Cole and Chambers go to India, it\'s clearly a green-screen showing the Taj Mahal in the background. When they go to Egypt, it\'s all fake. And even worse, when they go skydiving, it looks like some very awkward face-replacement on the stunt doubles. The film is basically a road-trip film, but without the trip. And with the whole movie being a big feel-good love fest, you might be able to look past all the flaws - but you should only do that on home video.