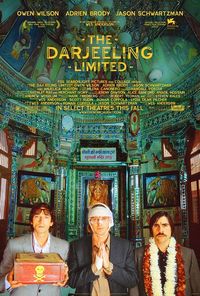 It\'s nearly impossible to mistake a Wes Anderson film for any other type of movie. From the pacing, composition of the frame, unique musical choices, and comedic writing, everything about his films are instantly recognizable. His latest film, The Darjeeling Limited is no exception to the formula he has now structured over the past few projects, and like all of his films, involve a cast of characters that take an emotional journey and find themselves.

In this particular case, the characters in question are three brothers: Francis (Owen Wilson), Peter (Adrien Brody) and Jack (Jason Schwartzman). Estranged after the death of their father, the three brothers meet in India at Francis\' behest to travel on the Darjeeling Limited train, and try to reconnect with each other. The journey they take results in plenty of sibling tensions, and explores the relationships between the three men as they travel through the heart of India and encounter the people and places within.

Anderson\'s pacing and the script (co-written with Roman Coppola and Jason Schwartzman) make The Darjeeling Limited a truly engaging film, never boring. Each of the characters have different personality traits: Francis has been injured and is trying to push the spiritual aspects of the trip on his reluctant siblings; Peter is wearing many of his father\'s clothes and jewelry; Jack has a fling with the stewardess on the train, and never wears shoes. Just watching them all interact is fascinating, and when combined with Anderson\'s off-kilter dialogue and situations, it makes it a fun yet emotionally moving film. By the time it finishes, The Darjeeling Limited will have touched everyone in the audience in one form or another.

Anderson eschewed the use of original underscore for the film, instead opting to license the Bollywood music from the films of Satyajit Ray (who would compose much of his own scores), as well as from the Merchant-Ivory films. It works, in a rather unique way, and Anderson\'s penchant for catchy music played over extreme slow motion sequences makes it a very slick audio experience as well.

There is a cameo by Natalie Portman which you\'ll miss if you blink - and it seems random, unless you\'re lucky enough to see the short film \"The Hotel Chevaliers\", which played in front of some prints when playing the festival circuit. It\'s basically \"Part 1\" to The Darjeeling Limited, and really only sets up a few plot points involving Jack. It won\'t detract from your enjoyment of the feature film, but it will certainly enhance it and give you the sense of knowing more than the rest of the audience. (It will also let you \'get\' a few more jokes!)

The Darjeeling Limited is a wonderfully presented film, with great cinematography, pacing, production design, writing, and acting. It\'s the whole package, and if you\'re not a Wes Anderson fan, you should definitely try to give him a chance with this one. You just might enjoy the trip.