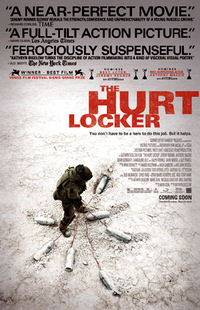 The Iraq War can be a rather contentious subject for a film, especially with Hollywood's typical anti-war approach, which has consistently failed at the box office.  So it was refreshing when a film not only tried to take an apolitical approach to the war, but really focused on a group of men who are fighting a unique aspect of it.  Following a U.S. Army Explosive Ordnance Disposal (EOD) team, The Hurt Locker is a tense film from beginning to end, as seen through the eyes of Sergeant First Class William James (Jeremy Renner), who joins Bravo Company after one of their bomb sappers were killed by an IED in Baghdad.  Various tense bomb diffusing situations are contrasted with life on the military base, where James can't wait to get out to the next mission.  Sometimes he goes a bit too far, putting the life of his fellow soldiers in danger, all for his adrenaline fix.

Directed by Kathryn Bigelow, The Hurt Locker is an exceptionally well done film.  While some of the characters come-and-go (there are a ton of cameos in the film), it is Renner who does a stand-out job keeping the audience connected.  James might not be the most likable guy, but you can see where he's coming from.  In a scene where the three main guys all get drunk and try to punch each other, Bigelow effectively captures the sense of aggressive male bonding.  The sound design in the film is excellent, keeping you on edge for most of the film.  Adding to the tension, and providing occasional emotional release, is the atmospheric electronic and guitar-heavy score by Marco Beltrami and Buck Sanders.

The Hurt Locker does occasionally dip its toe into the political side of things, but for the most part it does a great job at honoring our soldiers, and showing the inconceivable stress and dangerous situations that EOD teams are faced with on a near daily basis.  This is probably one of the best films of the year, and should easily be honored when awards season kicks in.