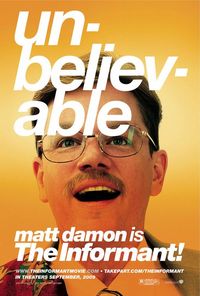 Journalist Kurt Eichenwald's novel The Informant concerns the true - and bizarre - story about ADM executive Mark Whitacre's role as an FBI informant in a price-fixing case. Reportedly, when director Stephen Soderbergh read the script for the film, he thought it was so absurd that it was hard to imagine it was all true - so he envisioned it as a comedy. In The Informant!, Whitacre (played amazingly by Matt Damon) approaches the FBI with information that the company where he works, ADM (Archer Daniels Midland) has been collaborating with their competitors to fix the price of lysine, a food additive. Over the next few years, Whitacre gathers hundreds of hours of evidence to help the FBI build their case against ADM and the executives. Unfortunately, it turns out that Whitacre himself has been hiding some secrets of his own - which threaten to derail the case, and turn all eyes on him.

The Informant! unravels at a steady pace, but things get increasingly bizarre. When the film starts, you sympathize with Whitacre - but by the time it ends, you're laughing out loud at the incredulity of the situations and the complete absurdity of it all - and yet it's all true. Scott Bakula plays the FBI agent who handles Whitacre, and you feel his frustration all the way through. But it's Damon who truly shines in the film.

The music - by veteran Marvin Hamlisch - is jaunty and replete with 1960s jazz and spy energy. The best way to think about the music is to assume it's the music that Whitacre is hearing in his head - because otherwise, it doesn't work as traditional underscore. It's great to hear Hamlisch on the big screen again, and there are moments in the film where the music leads the way and truly shines.

The Informant! is not a perfect film by any means, and has some flaws and plot holes - but it's great to watch Damon take on a role of this kind, and I found the film to be highly entertaining from start to end. As the billboards proclaim, it's "unbelievable"! But in a good way.