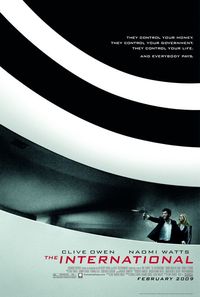 Given the state of the bank industry, it\'s not surprising that there would be a new thriller that pits the good guys against the evil banks. Or rather, one very very bad bank. Interpol agent Louis Salinger (Clive Owen) has teamed up with Manhattan Assistant DA Eleanor Whitman (Naomi Watts) to try to take down the International Bank of Business and Credit (IBBC) - which they believe to be involved with illegal arms trading, money laundering, and even political assassination.

Although a taut thriller, there are some rather predictable moments in the film, especially involving the \"conspiracy\" elements - we\'ve seen it all done before. But that being said, the way the general plot unfolds is enjoyable, and when Salinger has to go outside of the law to bring justice to the corrupt bankers, things get really exciting. One of the best sequences in the film involves the attempted apprehension of an assassin - and the ultimate shootout in the Guggenheim Museum is truly a phenomenal action setpiece.

Directed by Tom Tykwer (Run Lola Run), the film has a good pace to it, and the action blessedly never devolves into Bourne Ultimatum territory (no shaky-cams)! The ending leaves one a little flat, but there\'s a nice sense of comeuppance nonetheless. The music, composed by Tykwer with frequent collaborators Reinhold Heil and Johnny Klimek, effectively add to the tension, and include nice use of a delayed piano.

With Taken and The International, the body count from vigilante justice is starting to rise, and 2009 is off to a solid start for action thillers.