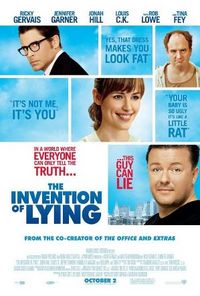 The Invention of Lying

Review: Invention of Lying, The

In The Invention of Lying, we are exposed to an alternate reality where humans are unable to lie.  As a result, there is no such thing as fiction, and Mark Bellison (Ricky Gervais) is a writer for a lecture-film series, and is stuck with writing about the Black Plague, which no one cares about. After a horrible blind date with Anna McDoogles (Jennifer Garner), where she pointedly admits that she has no interest in him, he's fired from his job and doesn't have enough money to pay the rent.  At the bank, the system is down and so the teller just asks how much money he had in his account - at which point, the miraculous concept of "lying" comes to him, and he lies about the amount, getting enough money to pay the rent.

With this newfound ability, Bellison starts to try it out on various friends, to humorous effect.  But soon, his ailing mother takes a turn for the worse, and in an effort to ally her fears that that there is nothing beyond this world, he makes up a lie about heaven.  But soon, word of this place that we go after death starts to spread, and Bellison must start coming up with new lies that help explain it all.  Ultimately he ends up talking about the "great man in the sky" and comes up with a set of moral rules - essentially inventing religion.  But soon the lies start to contradict each other, and Mark has a moral crisis.

The film is entertaining and funny at times, but once you get past the concept, it starts to lose steam.  Gervais is charming, but it feels like everyone tries too hard to make some kind of commentary on religion towards the last half.  It might be worth renting, but The Invention of Lying is hardly something to rush out and see on the big screen.