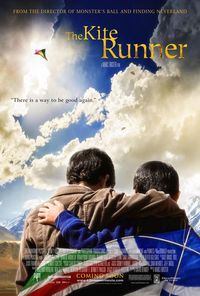 Based on the successful novel by Afghan-American author Khaled Hosseini, The Kite Runner is the emotional story about a Amir (Khalid Abdalla), a well-off young boy from Kabul who confronts the guilt - and consequences - of the betrayal of his childhood friend Hassan, the son of his father\'s \"Hazara\" servant. Directed by Mark Forster (Finding Neverland, Monster\'s Ball), the movie starts with the adult Amir getting a phone call to come back to Kabul, and then in flashback form, we are introduced to the young Amir and Hassan, who appear to be best friends.

Amir\'s interests lie in literature and writing short stories, activities that his father cares little for. But one thing that his father certainly appreciates is \"kite fighting\", something that he was good at as a child himself. Hassan is Amir\'s \"kite runner\", and would go retrieve any conquered kites from their landing spot. But when looking for a fallen kite, Hassan has a traumatic encounter with a bully - and Amir\'s cowardice prevents him from rescuing him, their friendship is forever affected. After the Soviet invasion of Afghanistan, the film takes us to Pakistan, before Amir and his father immigrate to America. Their new life in the USA is far different from the life of luxury they afforded in Afghanistan, and Amir and his father now face new challenges that will lead to Amir\'s return to Afghanistan during the brutal Taliban rule, to redeem himself for failing to protect Hassan all those years ago.

The film is excellent - one of the best of the year, without a doubt. 90% of the dialogue is in Dari (Afghan Persian), and only some of it in English, so it is predominantly subtitled. The focus of the film is not only on the relationship between Amir and Hassan, but really Amir and his father. The film explores the role of traditional beliefs in a society in transition, and does so with three-dimensional characters that you can connect with and follow on the journey. Forster does a great job with the child actors, and the cinematography (shot mainly in China) is beautiful. The music by Alberto Iglesias combines traditional ethnic instruments with a symphonic orchestra, and will stick with you long after the film has ended.

The Kite Runner is a strong film, delivering an engrossing story, wonderful acting, dramatic sequences, and is a must-see film.