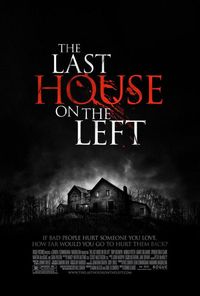 The Last House on the Left

Review: Last House on the Left, The

17-year old Mari Collingwood (Sara Paxton) is finally on vacation with her parents Emma (Monica Potter) and Dr. John (Tony Goldwyn), at their second home in the woods, where they can spend some time together, now a year after the tragic death of their son Ben. Bored, Mari decides to meet up with her friend Paige in town, and manages to convince her parents to let her stay the night at Paige\'s place. Stopping off in a convenience store, Mari and Page meet the sulking teen Justin (Spencer Treat Clark), who invites them back to the motel he\'s staying at, to smoke some weed.

The three teens have a good time - until Justin\'s father Krug (Garret Dillahunt) returns with his girlfriend Sadie (Riki Lindhome) and brother Francis (Aaron Paul). Seems that Krug was just busted out of custody en route to prison (killing two officers in the process).... and so they decide they need to take Mari and Paige with them. Meanwhile, Mari\'s parents are settling in for a nice quiet evening just the two of them.

When Mari realizes they\'re driving near her home, she tries to escape - but the plan goes awry and the car crashes in the woods. Now things get nasty, and ultimately Mari is raped, and Paige killed. (It\'s not ruining anything; this is all in the trailer!) Mari tries to escape again, and is shot and presumed dead. With a storm coming in, Krug & Co. need to find shelter... and the nearest home is actually that of Mari\'s parents. Though initially unsure, Emma and John offer hospitality and let Krug & Co. bunk in the guest house for the night. But then Mari comes home, and Emma and John realize that the people who did these horrible things to their daughter are under their roof - and plan their revenge.

The Last House on the Left is all about tension and comeuppance. The tension of knowing something bad is about to happen, and the sick glee that the audience can take when watching the bad guys get a taste of their own medicine. Produced by Wes Craven and Sean Cunningham, who made the original film, the movie works for the most part... but all of the work with the set up and payoff are completely destroyed with the last 30 seconds of the film. It\'s a coda that was completely unnecessary and eliminated whatever goodwill the audience had left for the protagonists.

The music by John Murphy is rather good, in the same vibe as 28 Weeks Later, with lots of electric guitars and tension. In the end, it\'s not the type of movie to run out and see - but if you enjoy a good amount of violence (including a rather exploitative and prolonged rape sequence), then you might find The Last House on the Left a decent thriller - but I\'d just wait and rent it.