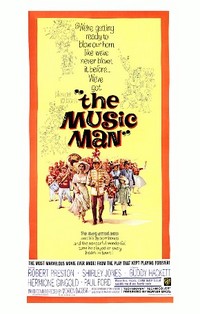 Based on the 1957 Tony Award-wining musical of the same name, the 1962 film adaptation of Meredith Wilson's The Music Man has long been considered a classic of musical cinema.  Coming at a time where film musicals were less and less popular, The Music Man was critically acclaimed, and one of the biggest hits of the year.  Five years ago, the film was selected by the National Film Registry to be preserved in the Library of Congress, and now Warner Brothers Home Video has released a newly restored version of the film on Blu-ray disc.

Taking place in 1912, The Music Man follows the exploits of Professor Henry Hill (Robert Preston), a con-man/salesman who preys on small towns selling them on the idea of a music band, without ever really delivering on his promises.  When he arrives in River City, Iowa, his scheme goes into effect, with the help of his associate Marcellus (Buddy Hackett), convincing the town that an all-boys marching brass band would be just the thing to keep the youth out of trouble.  In the process, he manages to light the musical spark in the rest of the town, while the skeptical librarian/piano teacher Marian (Shirley Jones) and the Mayor (Paul Ford) seek to figure out Hill's credentials.

As the town is lulled into a sense of purpose, Hill tries to win over Marian's affections, to no avail.  But when Hill manages to win over Marian's mother and younger brother, she slowly starts to warm up to him - just as another salesman comes into town to warn them all of Hill's scheme.  The Music Man contains numerous songs, most notably "76 Trombones", "Being in Love", "Shipoopie" and "Till There Was You", a song that has the notoriety of being the only Broadway number that The Beatles did a cover of.

Directed by Morton DaCosta, who also directed the musical on Broadway, The Music Man is a little long, but contains some excellent dance numbers, and retains a classic "Rogers and Hammerstein" old-fashioned structure that comes through the film production. And it helped make Preston - who played the role of Harold Hill on Broadway - a leading man overnight.

Originally released on DVD back in 1999, The Music Man has undergone a new HD restoration for Blu-ray, and it looks gorgeous for a film that is nearly 50 years old.  Colors are vibrant and pop, detail is crisp and film grain is natural, befitting the stock of the time.  Audio is presented in the DTS-HD Master Audio 5.1 Surround Sound, based on the remix done in 1999.  It's a decent remix, retaining a front-heavy presence, and letting the songs - as well as Ray Heindorf's Oscar-winning adapted musical score - shine.  That being said, there are some fidelity limitations, especially with some of the dialogue which feels a bit looped at times.  Unfortunately for purists, the original stereo audio track is not included, though the original Spanish and French mono tracks are.

The extras are rather slim pickings -we get an "Introduction by Shirley Jones" (SD, 2-minutes), and " Right Here in River City: The Making of Meredith Willson's The Music Man" (SD, 22-minutes), both of which were filmed over 10 years ago for the 1999 DVD release.  The featurette is short but insightful, featuring archival interviews with many of the principle cast members.  Rounding out the anemic features is a "Re-issue Trailer" (SD, 1-minute) that helps make a nice comparison from the old transfer to the new HD one.

Fans of The Music Man will find the Blu-ray has a great transfer, sounds good, and is still as entertaining today as it was nearly 50 years ago. It's a shame that the extras are rather weak, but don't let that deter you from checking it out!